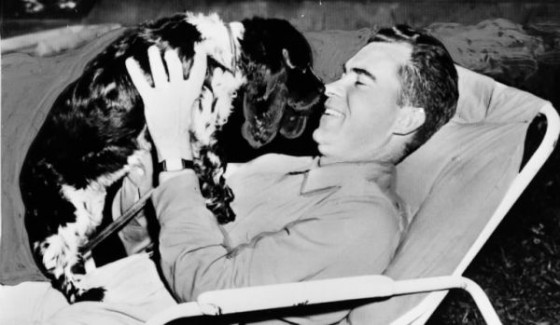 September 23 marks the 61st anniversary of one of the most consequential and precedent-setting speeches in U.S. history: Richard Nixon’s much-famed Checkers Speech.

Not only did this speech ensure 39 year-old Senator Nixon’s place on the 1952 Republican presidential ticket as Dwight D. Eisenhower’s vice president – thus serving as a launching pad for his eventual two-term presidency – but it, more than anything else, ushered in the television age. It revealed the new medium’s enormous power, one which Nixon skillfully used to his advantage.

It set a new precedent, too, for politicians and public figures in how they communicate to the public, now able to leap over the heads of the media and directly into Americans’ living rooms. It saved Nixon’s political career – and not for the last time, too.

Accused, without base, of improprieties in managing a “secret fund” for his own personal use, Nixon’s place on the ticket sank into serious jeopardy. On a lengthy train tour of the West Coast, the Nixons were only able to receive press updates at each stop the train made, thus rendering them prisoners while the story exploded all around them.

Flying back to Los Angeles, Nixon decided to fight the charges using the new, relatively untested power of television. In his nationwide broadcast he decided to give a complete release of all of he and Mrs. Nixon’s personal finances.

At the last minute before the speech was to be delivered, Nixon broke down; he couldn’t do it, he told his wife. “Yes you can,” Mrs. Nixon assured him. He would later credit her for giving him the strength to complete the speech.

In his first book Six Crises, RN refers to the event as ‘The Fund’ Crisis, but the television address is commonly known as the “Checkers” speech because of the reference to the Cocker Spaniel his daughters received as a gift: “you know, the kids, like all kids, loved the dog,” he said, “and I just want to say this, right now, that regardless of what they say about it, we’re going to keep it.” The personal note — in the face of baseless and unremitting attacks from opponents – proved powerfully touching to the 60 millions of Americans watching, the largest television audience of the time.

The resounding success was also felt by General Eisenhower, who affirmed his support for RN. “You’re my boy!” Ike grinned; the two would go on to win the election handedly.

With the passage of time, the salacious charges were conclusively proven false – but they forever scarred the Nixons. The speech seasoned Nixon’s political experience and convinced him, in the words of former speechwriter Lee Huebner, “that television was a way to do an end-run around the press and the political establishment.” The public release of her personal finances cemented Mrs. Nixon’s distrust of the political process – though that never showed in her future 25 years of honorable and widely celebrated service to her country.

Most important were the cultural implications of the speech: not only did it boost the Eisenhower-Nixon ticket, but it marked the beginning of mass communication in the political process, and, according to Huebner, led to the emergence of a conservative populism in America emphasizing public appeals to social and cultural identities rather than economic interests. Huebner noted that this contributed to the end of FDR’s New Deal coalition and paved the way for a conservative realignment that Nixon himself would lead 20 years later.

Watch the whole television address below: