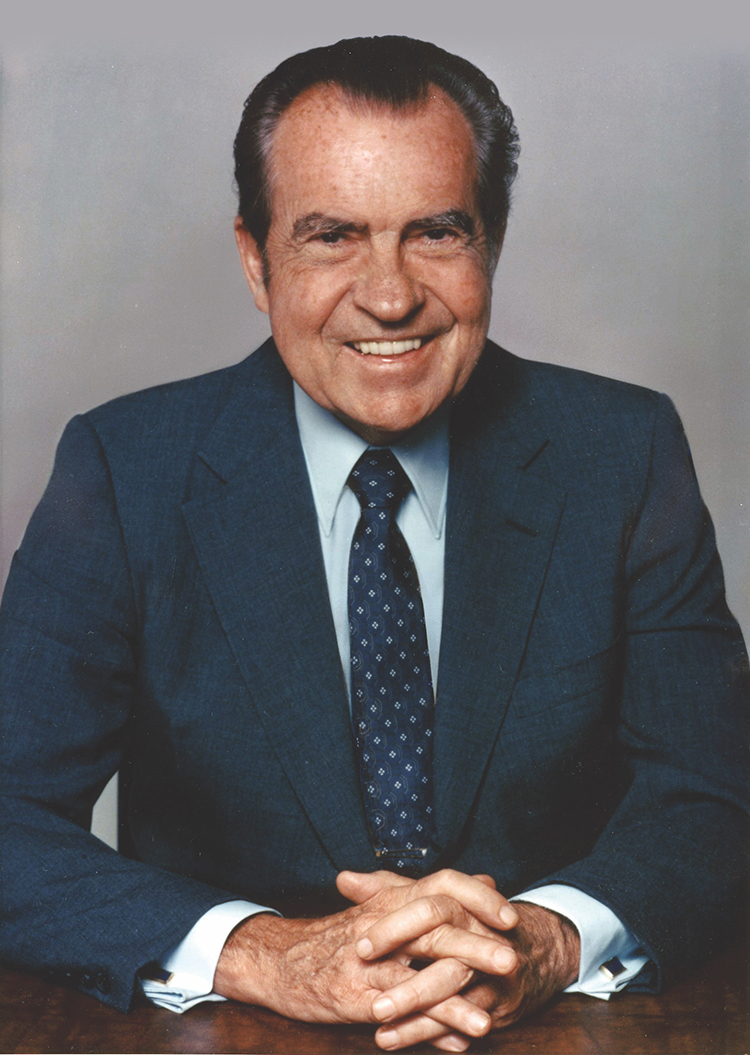 The 37th President of the United States was born on January 9, 1913 in a small farmhouse in Yorba Linda, California and raised in nearby Whittier. He attended Whittier College and Duke University School of Law and then joined a law firm in his hometown. He and Patricia Ryan were married in 1940.

In 1942 he applied for and received a Navy commission and was assigned to duty in the Pacific. He won a seat in the House of Representatives in 1946; in 1948 he took the lead role, as a member of the House Committee on Un-American Activities, in investigating espionage charges against Alger Hiss, who had spied for the Soviet Union before and during World War II. The case turned the young congressman into a national figure as well as a controversial one among those who asserted Hiss’s innocence. After two terms he was elected to the U.S. Senate. In 1952 General Eisenhower selected him as his running mate. He was Vice President for eight years. After losing to John F. Kennedy by a razor-thin margin in 1960 and then making an unsuccessful bid for governor of California in 1962, he practiced law, wrote, and traveled extensively in Europe and Asia.

After a painstaking political comeback that astonished political friends and foes alike, he was elected President in 1968 winning re-election in 1972 by a historic margin. While in office, he opened the door to the People’s Republic of China, established the policy of détente with the Soviet Union, laid the foundation for the Mideast peace process, and pursued domestic initiatives that included establishing the Environmental Protection Agency, launching the “war on cancer,” and bringing about the peaceful desegregation of public schools in the South. He made four appointments to the Supreme Court.

The central event of the the years Richard Nixon served as President — influencing virtually every aspect of U.S. foreign and domestic policy, causing substantial cultural and social upheaval, and leading ultimately to Watergate — was the Vietnam war.

When President Nixon took office in January 1969, he became responsible for the lives of 540,000 young Americans who had been sent to Indochina under the policies of the Kennedy and Johnson administrations. Choosing not to abandon an ally to certain defeat by the armies of communist North Vietnam, the President began withdrawing U.S. troops while bolstering South Vietnam’s capacity to defend itself and, when necessary, making Hanoi pay a substantial price for its aggression. Actions such as the Cambodian incursion in May 1970 and the bombing of North Vietnam in May 1972 and again in December saved American and South Vietnamese lives and won broad public support but drew harsh criticism from the anti-war movement, the media, and the Democratic Congress.

In January 1973, the Paris Peace Accords were signed, ending direct U.S. military involvement and paving the way for return of U.S. prisoners of war, many of whom had been brutally tortured by the communists. At the same time, the American side pledged to continue to support South Vietnam with military and economic assistance and by using air power if the communists violated the terms of the treaties. Recent scholarship suggests that as a result of the Nixon Administration’s war policies and its tactics in the peace talks at Paris, its goal of preserving the freedoms of the people of South Vietnam and Cambodia might have been fully achieved if the United States had kept its promises after the pact was signed.

A few months after the war ended, President Nixon was charged with complicity in blocking the FBI’s investigation of the June 1972 Watergate break-in. In a political atmosphere made even more corrosive by Democratic control of Congress, residual tension over Vietnam, and the nation’s deepening economic and energy-supply woes, the investigation was broadened to include matters ranging from the President’s conduct of the Vietnam war to his income tax returns and security expenditures ordered by the Secret Service at his and Mrs. Nixon’s personal residences.

After the House Judiciary Committee passed three Articles of Impeachment in July 1974 and the Supreme Court ordered the release of White House tapes that appeared to implicate the President further in Watergate, he decided to resign on August 9, 1974, prior to impeachment by the full House and the Senate trial that would have followed. Even though he was entitled under the Constitution to a trial conducted according to rules of evidence, he said that he did not want the nation preoccupied with Watergate for months to come. His second Vice President, Gerald R. Ford, was sworn in as President the same day.

After he resigned the Presidency, President and Mrs. Nixon returned to their home in San Clemente, where they lived until moving to New York City in 1980. In 1981, they moved to northern Bergen County, New Jersey.

In retirement President Nixon traveled throughout the United States and in dozens of countries in Europe, Asia, Africa, and the Mideast. In the fall of 1985 he undertook a five-week fact-finding trip, visiting and meeting with top leaders in China, Japan, South Korea, Hong Kong, Singapore, Malaysia, Thailand, Burma, Pakistan, Turkey, and Great Britain. In 1986 he returned to the Soviet Union to meet with Mikhail Gorbachev. Analysts later credited him with bringing the Reagan Administration and Soviet leaders closer to their eventual agreement to limit intermediate-range nuclear forces in Europe. In October 1989, during his sixth visit to China, he publicly expressed the outrage of the American people over the government crackdown in Tiananmen Square that June.

In the spring of 1991, after his first meeting with Boris Yeltsin in Moscow, he became an outspoken opponent of further aid to Gorbachev’s regime. After the fall of Soviet communism at year’s end, he advocated vigorous measures by the United States and its allies to support Russia’s historic transition toward political and economic freedom. In the course of this work he wrote articles, gave speeches, consulted with the Bush and Clinton Administrations, and made annual visits to non-communist Russia beginning in 1992.

His ten books, all bestsellers, include Six Crises (1962); RN: The Memoirs of Richard Nixon; and his last, Beyond Peace (May 1994). In 1985, he became the first former President voluntarily to give up lifetime Secret Service protection, saving taxpayers $3 million a year.

He died on April 22, 1994 in New York City and was buried on the grounds of the Nixon Library in Yorba Linda, at the side of his First Lady, on April 27, 1994. The eulogists at his State Funeral were President Bill Clinton, Senator Robert Dole, California Governor Pete Wilson, and his second Secretary of State, Henry Kissinger.

In an address to 4,000 mourners in Yorba Linda and tens of millions watching on television, Senator Dole predicted, “I believe the second half of the 20th century will be known as the age of Nixon….No one knew the world better than Richard Nixon, and as a result, the man who was born in a house his father built would go on to become this century’s greatest architect of peace.”