The Opening of China 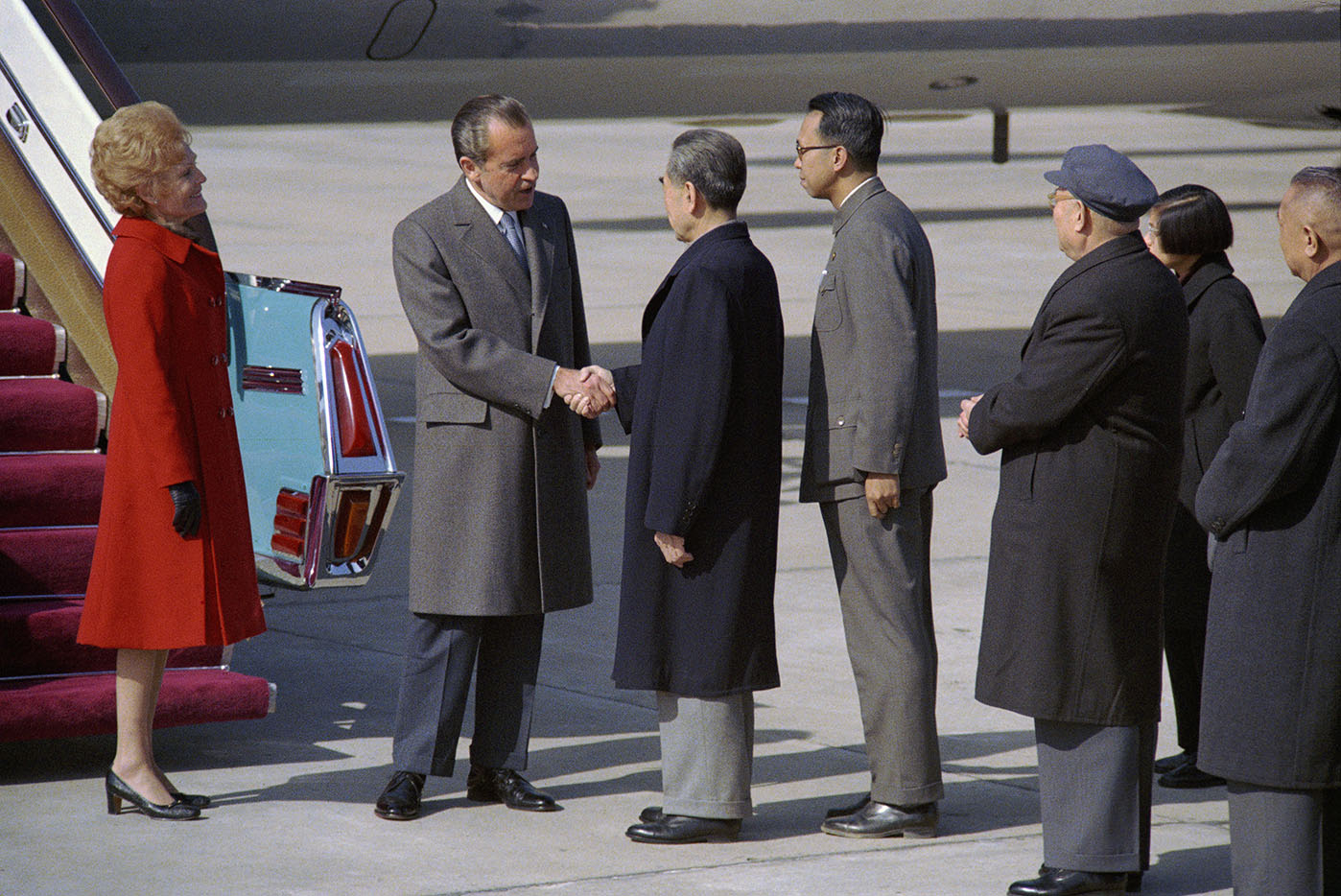 Through carefully coordinated public and private signals to the PRC’s leadership, President Nixon aimed to establish a new strategic framework built on peaceful relations with Beijing and stability in Asia, a relaxation of Cold War tensions with the Soviet Union, and an honorable end to the Vietnam War.

The Week that Changed The World

On July 15, 1971, President Nixon — broadcasting live from studios in Los Angeles — sent a tremor through the Cold War world, announcing that he’d be visiting the People’s Republic of China early the following year.

The move proved to be a geopolitical game changer.

When President Nixon took the oath-of-office in January 1969, the Vietnam War was raging.  He wanted to bring the nation beyond the decade long morass that was draining political capital and resources abroad, and intensifying social strife at home.

For the 37th president, rapprochement with China would help the United States end the war through diplomacy with a more powerful Communist country in Southeast Asia. It would also put pressure on the Soviet Union, whose relations were frayed with the PRC following clashes on its eastern border, make progress on the limitations of nuclear arms, and peace in parts of the world where it continued to be engaged.

After a series of carefully calibrated moves through PRC allies Romania and Pakistan, President Nixon landed in Peking in February 1972. He stepped off Air Force One, extended his hand to Premier Chou en-Lai, and ended nearly a quarter-century of non-communication.

Memorialized by the president as The Week that Changed the World, the trip culminated in the announcement of the joint US-China Communiqué in Shanghai.

Both sides agreed to articulate their substantial differences, make progress towards normalized relations, and refrain from seeking hegemony in the Asia Pacific region.

The most significant development came from the United States on the issue of its democratic ally Taiwan, affirming that “there is but one China and Taiwan is part of China,” and that a peace be settled by Chinese on either side of the Taiwan Strait.

In August 1974, when President Nixon resigned, his successor President Gerald Ford sent a personal letter to Chairman Mao Ze Dong pledging to continue on the path to stronger relations with the PRC, a policy still maintained by the White House today.

How It All Happened 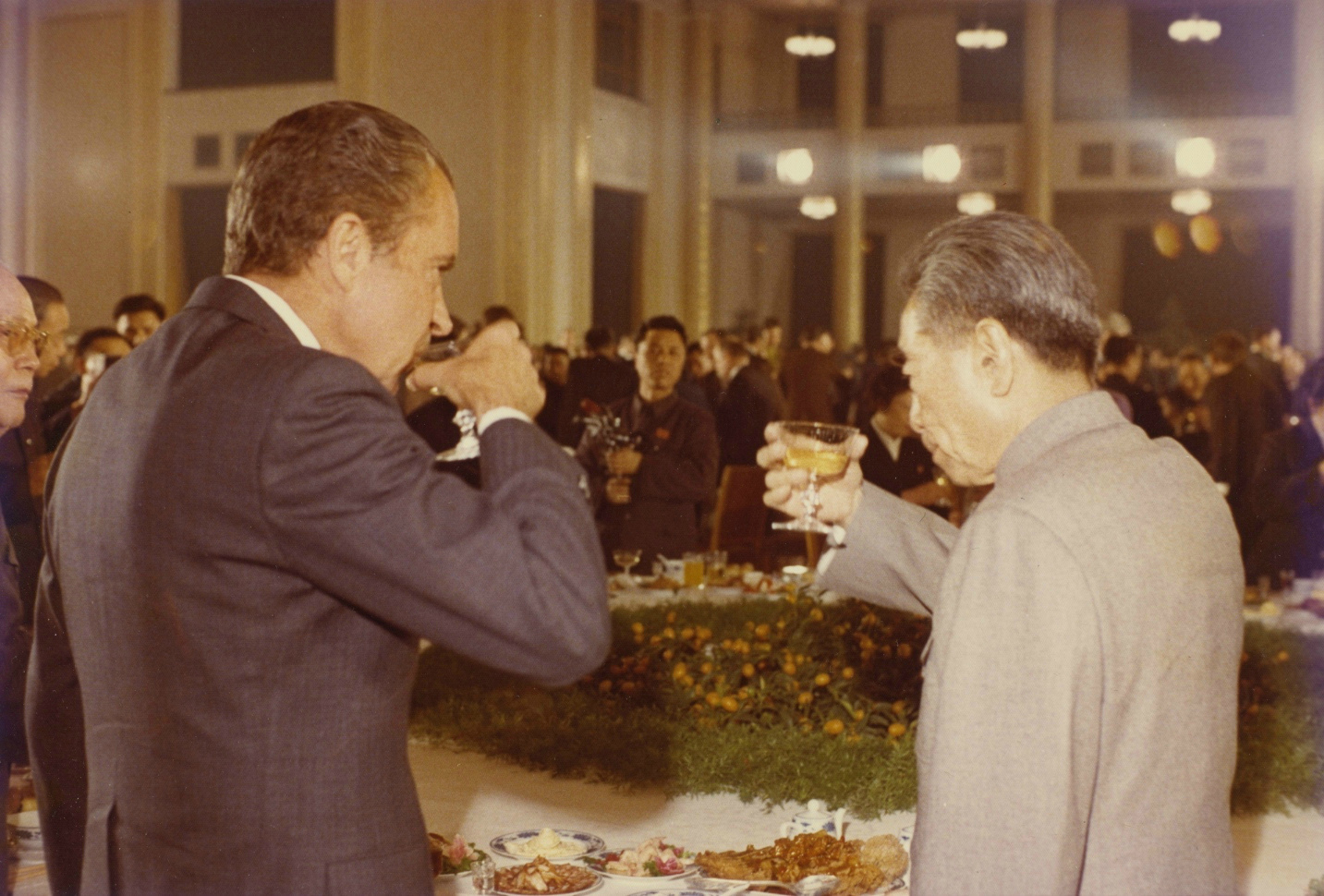 President Nixon’s historic trip to the People’s Republic of China rebuilt America’s image as a global leader and established a new international framework, erasing a decade of discord, defeat, and humiliation that came with the Vietnam conflict.

“At home, you had riots, assassinations and people being disillusioned with executive power,” argues Ambassador Winston Lord, a special assistant on President Nixon’s National Security Council who later became America’s ambassador in Beijing during the Reagan administration. “He thought if he opened China, the huge country, the drama and the importance of dealing with the giant would put in perspective the rather messy exit from Vietnam.”

The China initiative had immediate and very tangible consequences. It checked the USSR’s territorial ambitions, as well as its aspirations to dominate self-determined countries that shared a common belief in communism.

In 1968, Soviet General-Secretary Leonid Brezhnev declared the “Brezhnev Doctrine” invading Czechoslovakia with 600,000 Warsaw troops armed with Soviet tanks.  The brute use of force sent tremors through traditional allies including Romanian President Nicolai Ceaușescu, and Chinese leaders whose troops would subsequently clash with Soviet divisions along its Western Ussuri River border in March 1969.

“In Mao’s mind and the Chinese leadership’s mind they were really very concerned that this was a serious threat to them,” explains Admiral Jonathan Howe, then a military assistant on the NSC and later deputy national security advisor. “They didn’t feel we [the Americans] were territorial… but they thought the Russians would be. This was a motivating factor.”

He thought if he opened China… the drama and the importance of dealing with the giant would put in perspective the rather messy exit from Vietnam.”

During the first term, President Nixon and his national security advisor Dr. Henry Kissinger appealed through Anatoly Dobrynin, Moscow’s envoy in Washington, for a future summit agreement on the reduction of nuclear arms. The Soviets repeatedly rebuffed the overture until July 15, 1971, when the president announced that he’d be visiting Beijing in early 1972.  Within weeks, the Soviets responded with an invitation to Moscow, where President Nixon signed an Anti-Ballistic Missile Treaty with General Secretary Brezhnev in May of the same year.

“What emerged as the diplomacy unfolded was that we were in the favorable so-called ‘swing position,’ where the Soviets and the Chinese started, if you like, competing for good relations with us,” explains Ambassador Richard Solomon, then a senior staffer on the NSC and future assistant secretary of state for east Asian and Pacific affairs.

In triangulating relations between Moscow and Beijing, President Nixon was also able to impress U.S. strength and independence on the leaders of the PRC.

“We had a more normal relationship [with Moscow], we could have arms control… we could have principles of international relations,” Lord argues. “Kissinger would always go there [Beijing] after the Moscow Summit or the Russian encounters, and brief them both out of courtesy and reassure the Chinese, but also to make them a little bit nervous about the amount of business we had with them [Moscow].”

The initiative also aimed to put pressure on North Vietnam, who remained intransigent in negotiations over a ceasefire throughout President Nixon’s first term. RN believed that in negotiating with China and the Soviet Union, Hanoi would see itself alienated and isolated by both of its patrons who sought better relations with the United States. Furthermore, if Beijing were to balance Moscow, the U.S. would have to leave Vietnam with its prestige in tact.

The China initiative came to fruition through a series of carefully calibrated private and public moves.

In 1967, RN authored the seminal piece Asia After Vietnam, calling for China to break out of its “angry isolation” and to join “the society of nations.”

In February 1970, he sent his first foreign policy message to Congress calling for practical relations with Beijing, and in the two subsequent months eased travel restrictions and trade controls with the mainland.

After seeking private channels through President Charles de Gaulle of France, and President Ceaușescu, RN ultimately found a partner in President Yahyah Khan of Pakistan, a shared ally of both the United States and China during the Cold War.

Following a series of exchanges through Pakistan’s Ambassador in Washington, the Chinese leadership went dormant for the first few months of 1971, until Chinese leaders invited the U.S. ping-pong team playing at the World Championships in Tokyo to a series of exhibition matches in Beijing.

It was an enormous political risk for both Mao and for Richard Nixon.”

The breakthrough is forever etched in the annals of history as “ping-pong diplomacy.”

In July 1971, President Nixon sent Dr. Kissinger on a secret trip to China to hammer out the details of a presidential trip. Feigning a stomachache in Islamabad, the national security advisor touched down in Beijing to meet Premier Chou en-Lai.

The secrecy of the trip was crucial. Not only did the leaders of both countries have to navigate through their internal politics, but also faced objections from allies.

“It was an enormous political risk for both Mao and for Richard Nixon,” Solomon explains.

“They [the North Vietnamese] talked about a betrayal in the socialist movement,” Solomon said.

Though President Nixon faced fierce opposition on the Vietnam War from the political left, it was conservatives within the Republican Party who were vexed about his future meeting with communist leaders, and saw it as a betrayal to the US’s long standing ethnic Chinese and democratic ally, Taiwan.

Tokyo, too, was startled and angered about not being informed of President Nixon’s moves. The United States had a treaty with Japan; an obligation to insure its security.

“It was a trade-off,” Lord maintains. “We paid a certain price for secrecy… but it was worth it.”

And it was precisely this equation that set the stage for the Communiqué negotiated during Dr. Kissinger’s October 1971 trip, and finalized at the end of President Nixon’s February 1972 trip in Shanghai.

It was a trade-off. We paid a certain price for secrecy… but it was worth it.”

Though both sides agreed to articulate their substantial differences in the Communiqué, the United States acknowledged that there was “One China and that Taiwan was part of China,” declaring a reduction in US forces and that any political solution be initiated and forged by parties on either side of the straight.

Japan would still be assured a security umbrella by US forces, a position that Chou en-Lai came to accept at the persuasion from Dr. Kissinger, who ensured that a US presence in Japan would be a check against the type of unabated military adventurism it displayed during World War II.

The presidential trip proved to be an enormous success, and the goodwill showed between the two nations was projected on television sets across the United States, as President Nixon – and first lady Pat donning a red cloth coat – brought China to the world stage beginning with RN’s outstretched hand to Premier Chou upon stepping off Air Force One (a particularly symbolic gesture since former Secretary of State John Foster Dulles refused to shake Premier Chou’s hand at the 1954 conference between the great powers in Geneva).

“The American people got Nixon on the Great Wall, on the opening banquet, or other things at prime time, either breakfast or evening,” remembers Ambassador Nicholas Platt, then the State Department’s leading Sinologist who would later help direct the US liaison office in Beijing. “The impact of that week, I think, was to change American attitudes towards the opening to China.”

Privately, the president and his top aides were briefing Chinese leaders on intelligence of Soviet activities, hammering out the final details of the Communiqué, and putting together the “nuts and bolts” of the future relationship on day-to-day issues from trade and travel, to immigration and education.

“The Nixon trip was a cataclysmic diplomatic event,” says Platt. “Now these two peoples were beginning to figure out how to work with each other.”

Story adapted from a Nixon Legacy Forum on “The Opening to China.” This event took place at the U.S. National Archives in Washington D.C. on November 12, 2014.

Kissinger, Henry. “Steps Towards Augmentation of Travel and Trade Between the Peoples Republic of China and the United States.” Memorandum for the President. White House, Washington, D.C. 25 March 1971.

Kissinger, Henry. “Subject: Briefing of the White House Staff on the July 15 Announcement of the President’s Trip to Peking.” Memorandum for the President. White House, Washington, D.C. 19 July 1971.

The Trip to China

Joint Communique issued by leaders of the United States of America and the People’s Republic of China. Shanghai. 28 February 1972.

Kissinger, Henry A. “My May 16 Meeting with the Chinese.” Memorandum for the President. White House, Washington, D.C. 16 May 1972.

Nixon, Richard. “Remarks to the Nation Announcing Acceptance of an Invitation To Visit the People’s Republic of China.” NBC studios, Burbank, Calif. 15 July 1971.

Crowley, Monica Elizabeth. “‘Clearer than Truth’: Determining and Preserving Grand Strategy. The Evolution of American Policy toward the People’s Republic of China under Truman and Nixon.” Columbia University, 2000.

Wu, Fu-mei. “The China Policy of Richard M. Nixon from Confrontation to Negotiation.” University of Utah 1976.

Frankel, Max. The Times of My Life and My Life with the Times. New York: Random House, 1999.

MacMillan, Margaret. Nixon and Mao: The Week That Changed the World.
Mann, James. About Face: A History of America’s Curious Relationship with China, from Nixon to Clinton. New York: Alfred A. Knopf, 1999.

Platt, Nicholas. How U.S. Relations with the PRC Began and Grew. A Personal Memoir. Vellum, 2010.