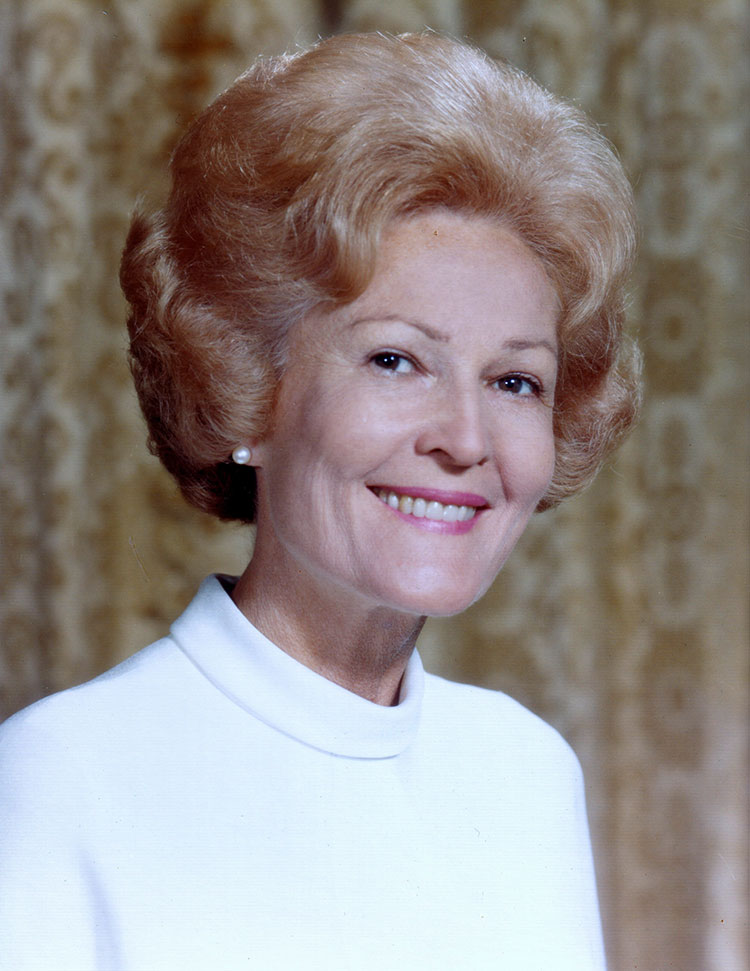 Patricia Nixon, the wife of the 37th President of the United States, was born in Ely, Nevada. Her mother, Kate Halberstadt Ryan, named her daughter Thelma Catherine. Her father, William Ryan, coming home past midnight from his work in the mines, learned of her birth and called her his “St. Patrick’s babe in the morn.” She was to be “Pat” to him always.

Before Pat Nixon was a year old, Kate Ryan, whose first husband had been killed in a mining accident, persuaded William Ryan to give up mining. The family then moved from Nevada to California, settling on a small farm in Artesia, 20 miles southeast of Los Angeles. Today, the site of this home in Cerritos is the Pat Nixon Park.

The future First Lady had a childhood with no luxuries except that of a warm and loving family. But this was shattered when her mother died in 1925. At the age of 13, Mrs. Nixon took over the household duties for her father and her brothers. Two years later, when she was attending Excelsior High School, her father became seriously ill and she cared for him, as she had her mother, until his death in 1930. She was then 18, a high school graduate and completely on her own.

Her first ambition was a college education. She enrolled at Fullerton College and earned her expenses by working part time as a janitor in a local bank. She was able to fulfill her second ambition – to travel – in 1931, when elderly friends of her family asked her to drive them to the East Coast. She drove them to New York where she stayed for two years working in a hospital, first as a secretary, and later, after a Columbia University summer course in radiology, as an X-ray technician.

Her interest in drama began during her working days at USC when she earned $25 for a walk-on part as an extra in the movie “Becky Sharp”. In addition to directing the high school plays, she joined the Whittier Little Theater group. It was then that she met Richard Nixon, a young lawyer recently graduated from Duke University Law School in Durham, North Carolina. They were given the leading roles in a mystery drama, “The Dark Tower”, by George Kaufman and Alexander Wolcott.

They met in 1937, and were married on June 21, 1940, in a Quaker ceremony at the historic Mission Inn in Riverside, California. The couple left for a honeymoon in Mexico, driving to Laredo and then down the Pan American Highway to Mexico City. They returned to Whittier and settled in an apartment over a garage while Mrs. Nixon continued teaching and Dick Nixon was in private law practice.

One year later, they moved to Washington, D.C., where Mr. Nixon was an attorney in the Office of Emergency Management until he volunteered for naval service. He spent two months at Quonset, Rhode Island, and in March, 1942, he was commissioned into the Navy as a lieutenant (junior grade) and received his first active duty assignment to Ottuma, Iowa, as an aide to the officer in charge of setting up a Naval Air Base. Mrs. Nixon worked in a bank in Ottumwa and when her husband was assigned to duty in the South Pacific, she moved to San Francisco, California, where she worked as an economist for the Office of Price Administration. After 14 months in the South Pacific, Lt. Nixon returned and they moved to Baltimore, Maryland, where he handled contract terminations for the Navy.

It was in 1946 that Mr. Nixon entered political life as the Republican candidate for California’s 12th Congressional District. Nine days after Mr. Nixon announced his candidacy, their first daughter, Patricia, called Tricia, was born in Whittier, on February 21, 1946. Richard Nixon was elected to the U.S. House of Representatives and was re-elected to the seat in 1948, the year in which their second daughter, Julie, was born, on July 5, in Washington, D.C.

In 1950, Mr. Nixon won the election as United States Senator from California. Two years later he was elected Vice President of the United States under Dwight D. Eisenhower. Both were re-elected in 1956. During all of the Nixon campaigns, Pat Nixon was so effective a campaigner at her husband’s side that the Nixons became known as the “Pat and Dick Team.”

As the wife of the Vice President, Mrs. Nixon accompanied her husband to 53 countries around the world, visiting hospitals and schools by day and dining with heads of state by night. She was so effective a goodwill ambassador that President Eisenhower always sent the Nixons as a team.

She was staunchly behind her husband during his political campaigns for the Presidency in 1960, and for the Governorship of California in 1962. Leaving political life after the 1962 elections, the former Vice President and his wife made their home in New York City, in an apartment overlooking Central Park. Here, Mr. Nixon maintained a successful law practice and Mrs. Nixon enjoyed the city’s cultural life. When her husband decided to re-enter politics in 1968, Pat Nixon once again began the campaign life, fulfilling her role graciously and effectively.

Her work in the White House flowed from her boundless compassion for humanity. She was the first First Lady to champion volunteerism. She blazed the literacy trail with the “Right to Read” program. She pushed to establish new recreational areas in or near big cities for those who could not afford to visit distant national parks.

She was a confident player on the world stage, traveling to over 80 countries during her years of public service. She accompanied President Nixon to the People’s Republic of China and undertook solo missions to Africa and South America. On her trips she kept luncheons, banquets, and formal receptions to a minimum so she could visit schools, hospitals, orphanages, old people’s homes, and even a leper colony in Panama.

During the Nixons’ 1969 trip to South Vietnam, she became the first First Lady to visit a combat zone, in an open helicopter and accompanied by Secret Service agents draped with bandoleers. In June 1970, Mrs. Nixon flew supplies gathered by volunteers to earthquake ruptured Peru. For this, the Peruvian Government gave Mrs. Nixon the highest decoration their country can bestow – The Grand Cross of the Order of the Sun. This award is the oldest decoration in the Americas and Mrs. Nixon became the first North American woman to receive this award.

At home, Mrs. Nixon reached out to the American people by inviting them into the people’s house and taking special care to preserve and enhance it. “The Nixon era was the greatest single period of collecting in White House history,” historian William Seale said. “The great collection of White House Americana today is the long shadow of Mrs. Nixon. The impulse, the idea, and the energy were hers.”

She arranged the first White House tours for the visually and hearing impaired and inaugurated the famous candlelight tours for people who worked during the day. And she believed that the house into which she brought so much light should be lit at night like Washington’s other monuments, so she began the tradition of having the White House lit at night.

In retirement, Mrs. Nixon was a devoted grandmother to Jennie, Christopher, Alex, and Melanie. Although she kept her public appearances to a minimum, polls showed that she remained one of America’s most admired women. She died on June 22, 1993 at home in Park Ridge, New Jersey with her family at her side. She was buried on the grounds of the Nixon Library, a few steps from her husband’s birthplace, on June 26, 1993.