On This Day: William Rehnquist and Lewis Powell Confirmed as Associate Justices of the Supreme Court 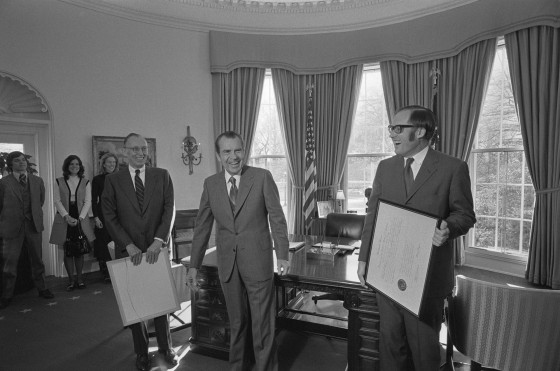 On December 10 1971, following intense scrutiny by the legislative and executive branches of the Federal Government, the Senate confirmed President Nixon’s nominations of William Rehnquist and Lewis Powell as Associate Justices of the Supreme Court, thus completing the President’s unprecedented duty of filling four vacant Supreme Court seats during a single presidency.

On September 17, the retirement of two Supreme Court Justices, Hugo Black and John M. Harlan was announced. The selection of the next two Justices caused some political stir. The American Bar Association, captured by an ideologically liberal leaning bloc, put forth possible candidates aimed at countering potential Nixon nominations. However, President Nixon came up with Lewis Powell, a 64 year-old Georgia Democrat and former president of the ABA, and the much younger 47 year-old Assistant Attorney General William Rehnquist as likely nominees. Both nominees were both relatively conservative in that they followed the same lines of President Nixon’s constitutional philosophy, but there was no credible opposition to them nor were their resumes exceptionable. The Senate confirmed Powell by a margin of 89-1 and Rehnquist by a margin of 68-26. Both went on to serve as distinguished Supreme Court Justices.

Below are President Nixon’s biographies of both candidates when he announced their nomination on October 21 of the same year:

Everything that Lewis F. Powell has undertaken he has accomplished with distinction and honor, both as a lawyer and as a citizen. Excellence has marked his career since his days as a student at Washington and Lee, where he was Phi Beta Kappa and first in his class at law school. He has practiced law in Richmond since 1931, except for 4 years of distinguished service during World War II.

Lewis Powell is from Virginia. But like another great Virginian, Chief Justice Marshall, Lewis Powell is recognized by his legal colleagues throughout the Nation as being a man who represents not just Virginia and the South–he is first and foremost a very great American.

William Rehnquist has been outstanding in every intellectual endeavor he has undertaken. He was graduated from Stanford University Phi Beta Kappa, 1948. He graduated first in his class from the Stanford University Law School in 1952. And then he was awarded one of the highest honors a law graduate can achieve: He was chosen as law clerk for Mr. Justice Robert Jackson, one of the most outstanding members of the Supreme Court in the past half-century.

In this position, he acted as legal assistant to the Justice, and his duties included legal research of the highest order.

Upon leaving the Court, Mr. Rehnquist engaged in the general practice of law for 16 years in Phoenix, Arizona, until 1969, when I appointed him Assistant Attorney General, office of Legal Counsel.

Now, that is a very technical name. Let me tell you what it means. The Legal Counsel has a very special function in the Department of Justice, serving as the chief interpreter, for the whole Government, of the Constitution and the statutes of the United States. He is, in effect, the President’s lawyer’s lawyer.

I was a member of a major New York law firm, a senior partner. I have had the opportunity both in Government and in private practice to know the top lawyers in this country, and, as a matter of fact, some of the top lawyers in the world, and I would rate William Rehnquist as having one of the finest legal minds in this whole Nation today.

He has discharged his responsibility in his capacity as the President’s lawyer’s lawyer with such great distinction that, among the thousands of able lawyers who serve in the Federal Government, he rates at the very top as a constitutional lawyer and as a legal scholar.

Lewis Powell. William Rehnquist. Those are names you will remember, because they will add distinction and excellence in the highest degree to the Supreme Court of the United States. 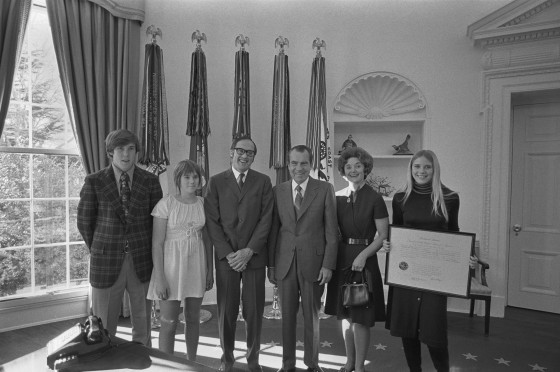 President Nixon poses with the Rehnquist family. The appointment of William Rehnquist became one of RN’s longest lasting legacies, as the Supreme Court Justice served until his death in 2005.