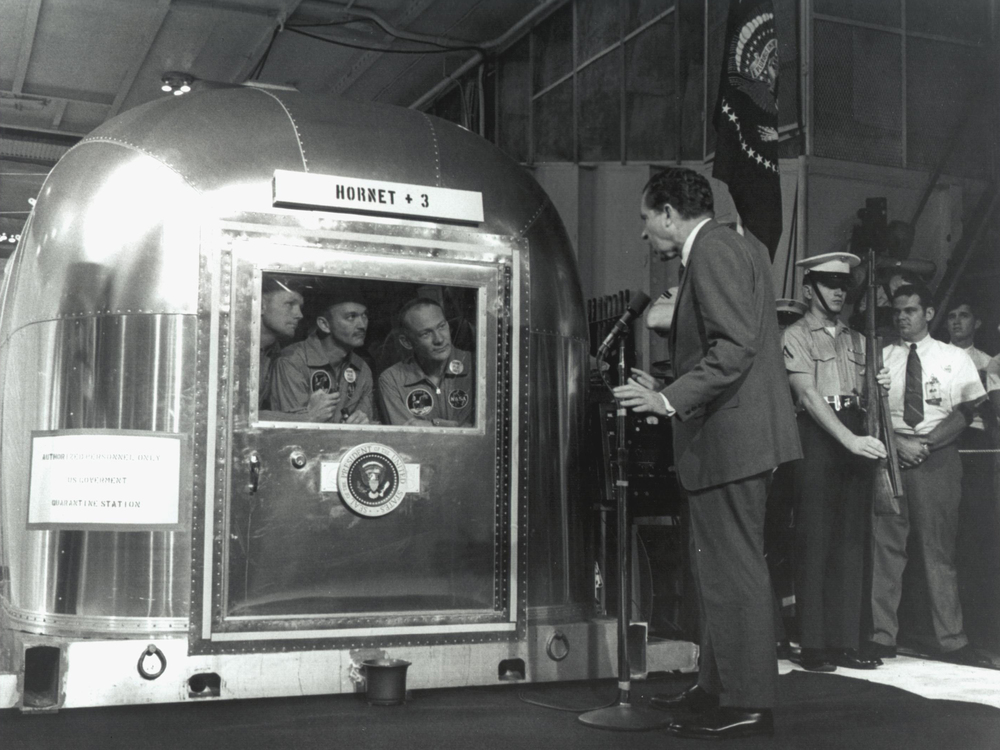 President Nixon with Apollo 11 astronauts, left to right, Neil Armstrong, Michael Collins, and Buzz Aldrin, through the window of the Mobile Quarantine Facility aboard the USS Hornet. (July 24, 1969)

Richard Nixon assumed the office of the presidency at the height of America’s space program. He presided over the National Aeronautic Space Agency’s (NASA) largely successful Apollo program, overseeing as commander-in-chief 9 of the 12 manned Apollo missions, including six successful moon landings — one of them the first moon landing achieved in human history.

The Apollo program, though the most far-reaching and successful endeavor of human exploration, operated at a cost beyond the rational means of the American economy. Though President Nixon supported continued endeavors, he recognized that at some point, the United States would have to be practical and pragmatic about its efforts in space.

“By no means should we allow our space program to stagnate. But–with the entire future and the entire universe before us-we should not try to do everything at once. Our approach to space must continue to be bold–but it must also be balanced.”

-Bold exploration of the planets and the universe.
-Seek to extend man’s capability to live and work in space
-Continued exploration of the moon, but spaced so as to maximize scientific return for each mission.
-Hasten and expand the practical applications of space technology.
-Encourage greater international cooperation in space.
-Reduce substantially the cost of space operations.

Perhaps the single greatest achievement with respect to America’s space program was his leadership directed at transforming the existing space program policy from one of indulgent investment to one on par with other national priorities.

President Nixon achieved such a feat through two methods. He formed a Space Task Group at the beginning of his presidency with the mission of reevaluating NASA’s operational budget and priorities. As a result of the Space Task Group’s recommendations, President Nixon in the beginning of 1972 directed that NASA commence its Space Shuttle program. The Space Shuttle program – which retired in 2011 – is the longest yet program launched by NASA. It produced 135 total flights and countless cutting-edge research missions while minimizing the NASA budget through the use of a reusable spacecraft. 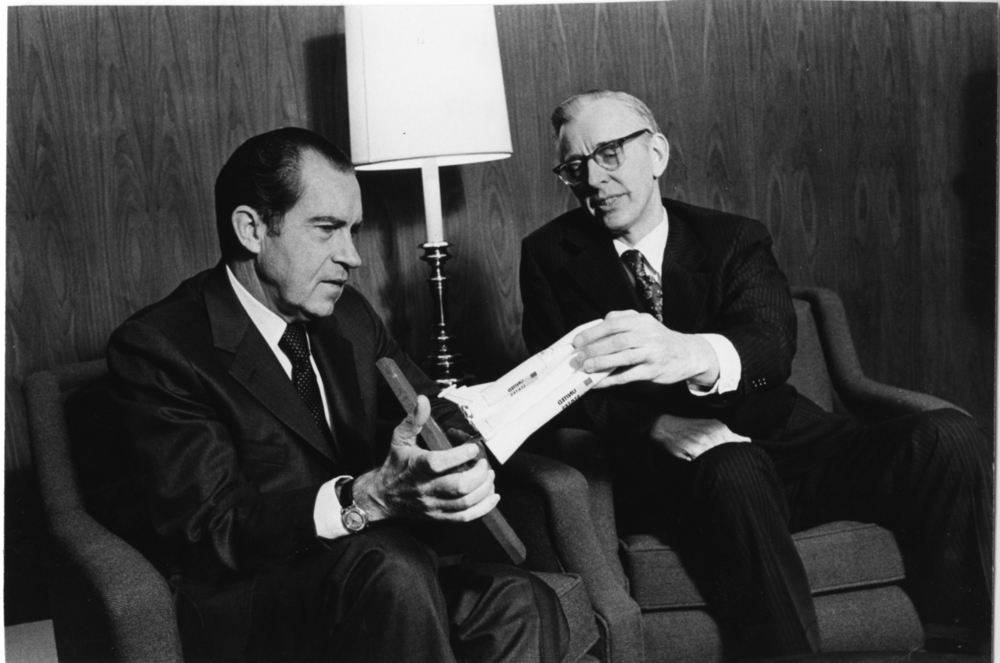 President Nixon also recognized the correlation between space exploration and foreign policy. In May, 1972, during the first Moscow Summit of the SALT I talks, he and Soviet Premier Alexei Kosygin signed an Agreement Concerning Cooperation in the Exploration and Use of Outer Space for Peaceful Purposes, which committed both the USSR and the United States to the launch of the Apollo–Soyuz Test Project in 1975. This signaled a significant shift from the combatant nature of the Cold War space race.

President Nixon also presided over the launch of the United States’ first space station – Skylab. Skylab orbited Earth from 1973 to 1979, and included a workshop, a solar observatory, and other systems. It was visited three times by manned NASA crews (3 crewmembers each) from 1973 to 1974.

With these initiatives, President Nixon influenced the greatest lasting impact on America’s space program. His redefinition of space priorities, in line with the pragmatic needs of the public, guided the tenets of NASA policy for the next 40 years. What had once been a race to the moon by all means necessary became a more reliable mechanism for technological innovation and perhaps more importantly, international cooperation.

“Of all of man’s great enterprises, none lends itself more logically or more compellingly to international cooperation than the venture into space,” President Nixon said to the UN General Assembly in 1969. “Here, truly, mankind is one: as fellow creatures from the planet earth, exploring the heavens that all of us enjoy.”