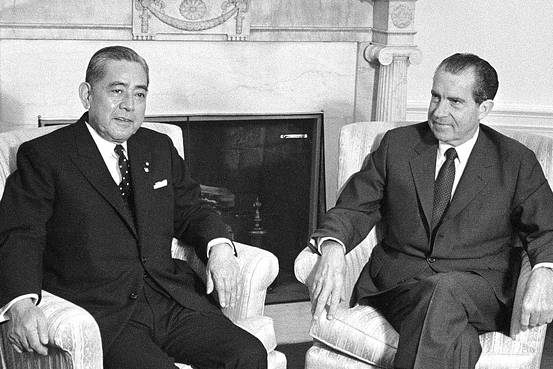 This political cartoon from August 1971 suggests a foreboding future for relations with Japan. Fortunately, the reality was not so grim.

One of the first National Security Study Memoranda (NSSMs) President Nixon issued was NSSM 5, a study on US policy toward Japan. The immediacy of this NSSM — issued January 21, 1969, the day after Nixon took office — demonstrated the urgency of the issue of the Okinawa reversion. But after this issue had been more-or-less settled, relations with Japan continued to delicately develop, which necessitated that the Nixon administration create another study on Japan: NSSM 122, issued April 15, 1971. For NSSM 122, crises centered on textiles, metaphorical cows, and a surprising TV announcement.

One of the primary concerns of NSSM 122 was preparations for the fast-approaching Eighth Meeting of the Joint US-Japan Committee on Trade and Economic Affairs (EconCom) on September 9-10, 1971 in Washington DC. Economic relations between the two countries faced great hurdles, especially in regards to US opposition towards Japanese textile exports. At this point, many American observers feared that tensions over textile matters would escalate into a trade war.

Another concern in 1971 was that Japan was not shouldering enough responsibility in its own defense and in the defense of Asia. In this telegram to Secretary of State William Rogers, Ambassador to Korea William Porter describes the US-Japanese relationship as “a division of labor in which the U.S. not only feeds the cow, but furnishes the umbrella [a reference to the ‘nuclear umbrella’] and holds it over Japan while it does the milking.” But any move to strengthen Japan’s defense would have to be pursued delicately, as other Americans and Japan’s geographical neighbors feared its military and nuclear potential.

A draft of the NSSM was completed in the early summer, but then a shocking announcement in the summer of 1971 demanded recalibration of US-Japanese relations. On July 15, 1971, President Nixon accepted an invitation to visit the People’s Republic of China (PRC). A preface that was added to a summary of NSSM 122 on August 2 summarizes the Japanese reactions. The US may have been a close ally, but Japan was not prepared to normalize its own relations with the PRC. PRC propaganda vilified the Japanese Liberal Democratic Party by accusing them of reviving Japanese militarism, and Japan feared that China wanted to weaken the close US-Japan relationship. Nixon’s decision, made without Japanese consultation, was seen as a blow to the “waning prestige” of Prime Minister Sato Eisaku. Such an assertion threatened an important alliance, considering Sato was a conservative ally and “political descendant” of former Prime Minister Shigeru Yoshida, who had advocated for a strong alliance with the US “at any cost.”

The NSSM summary proposes four military options and three economic options to deal with these problems.

An Addendum to NSSM 122 hypothesized that Sato had grown so unpopular that he would be unable to remain in office after the ratification of the Okinawa agreement by the Japanese governing body, the Diet.

NSSM 122 and other documents served to inform the National Security Council on these matters — and fortunately, solutions were soon forthcoming. On September 7, Henry Kissinger issued National Security Decision Memorandum 130, just in time to clarify the US position and goals for EconCom. While NSSMs are no more than studies, NSDMs reflect real decisions.

The success of EconCom improved the prospects of relations between the US and Japan as the seminal year of 1972 approached. A memo from October 22 of 1971 reveals that a compromise on the textile issue had been agreed upon, and, to the relief of both Japanese and Americans, signed on October 17. The issue on China continued to loom large, but progress was apparent.

On November 10, the Senate approved the Okinawa agreement 84-6. On November 24, the Lower House of the Diet ratified it 285-73, and the House of Councilors of the Diet ratified it 131-108 on December 22. Sato remained in office — he was able to meet Nixon in San Clemente on January 6 and 7 to agree upon a date for Okinawa reversion, and finally to receive back Okinawa on May 15. (He retired shortly afterward, on July 7, having served as Prime Minister longer than anyone else in Japan’s history.) The problems in the US-Japan-China relationship took longer to settle, as did anxieties over Japan’s self-defense, but by the middle of 1972 the relationship between the US and Japan was a far cry from an ominous sunset.