A Visit From the Emperor of Japan 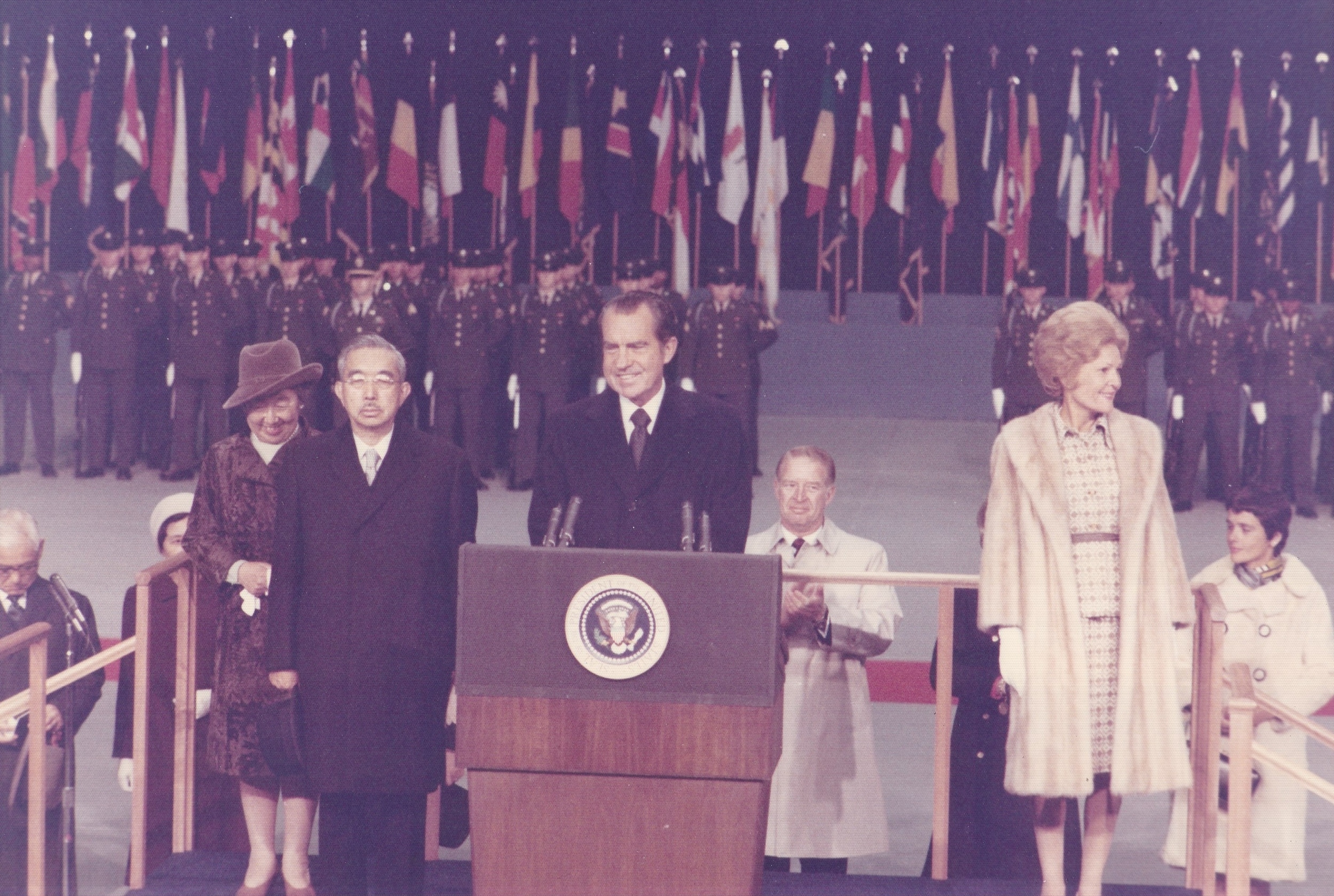 On September 26, 1971, Hirohito, the emperor of Japan, touched down in Anchorage, Alaska, where President Nixon was waiting to greet him. The meeting was brief, as the emperor was Europe-bound: his plane landed at 10 pm and took off again at 11:40. Nevertheless, it was a momentous occasion as Hirohito had now become, in the words of President Nixon, “the first reigning monarch in Japan’s long history to step on foreign soil.” This was especially remarkable since the Japanese monarchy was and remains today the oldest continuous ruling family in the world.

Hirohito, who is now known in Japan by his posthumous name Emperor Showa, is most famous for ruling Japan during World War II and, in the aftermath, issuing the Humanity Declaration which denied his status as a living god. But, though he was then no more than a figurehead, he continued to make history by improving Japan’s diplomatic image with his unprecedented foreign travel. Well before World War II, as a 20-year-old Crown Prince, he had spent three months in Europe, which made him the first member of the Imperial Family to leave Japan. From Alaska in 1971, he spent three days in Britain, which marked his first official state visit, and from there he visited Bonn and Paris. At St. James’ Palace in London, he told US Ambassador to the UK Walter Annenberg to thank Nixon for hosting him.

However, he was unable to make an extended visit to the US until 1975, when he would meet President Gerald Ford and then stop by New York, Boston, Chicago, the West Coast, and Hawaii.

The emperor’s ability to visit the US was impeded by the memory of a disastrous near-visit of a president to Japan. From 1959-1960, millions of Japanese had protested Diet approval of the revision of the 1960 Security Treaty. In June of 1960, protesters attacked a car carrying the US Ambassador Douglas MacArthur II and Press Secretary James C. Hagerty, and they had to be rescued by military helicopter. The violence was such a blow to the fledgling friendship reemerging between the two countries that President Eisenhower had been forced to cancel his trip to Japan later that month. Though more than a decade had passed, no President had made an official visit to Japan since. Hirohito did not wish to make an extended visit to the US until a president was able to exchange the honor.

At Anchorage, Nixon reflected upon the “web of political, economic, and cultural ties” that the US and Japan had woven over the past quarter-century. 25 years ago, in 1946, Japan had been under US military occupation. Since then, it had become independent — the last piece, Okinawa, would soon return to it on May of 1972. It had developed the third-largest economy in the world. Four different Japanese Prime Ministers — Shigeru Yoshida, Nobusuke Kishi, Hayato Ikeda, and Eisaku Sato — had met with four different American Presidents — Dwight Eisenhower, John Kennedy, Lyndon Johnson, and Richard Nixon. Japan had taken an interest in baseball, America in Japanese art, and both countries cooperated on research of the environment and outer space.

Nixon recognized the significance of this meeting, in spite of its brevity. He requested a plaque to be affixed at the spot.

The residents of Anchorage also felt the importance of the meeting. At the time, Alaska had the smallest state population (it now ranks 47th), and it had only been a state for twelve years. A briefing paper points out that Anchorage itself is “just about as old as the President.” The state was especially close to Japan, both economically — Japan bought 95% of Alaska’s exports on mineral, wood, and gas — and geographically — some Alaskan islands are closer to Japan than Anchorage. The mayor of Anchorage today, Daniel Sullivan, is the son of the mayor who hosted Nixon and Hirohito, George Sullivan.

Even the youngest residents appreciated Nixon’s visit. One young Alaskan hoped that Nixon, if he went fishing, managed to catch some starfish.

The visit of the emperor to Anchorage illustrates that even the briefest of meetings can have vast historical importance, and can pave the way for further progress between countries.