The Dawn of the Space Shuttle 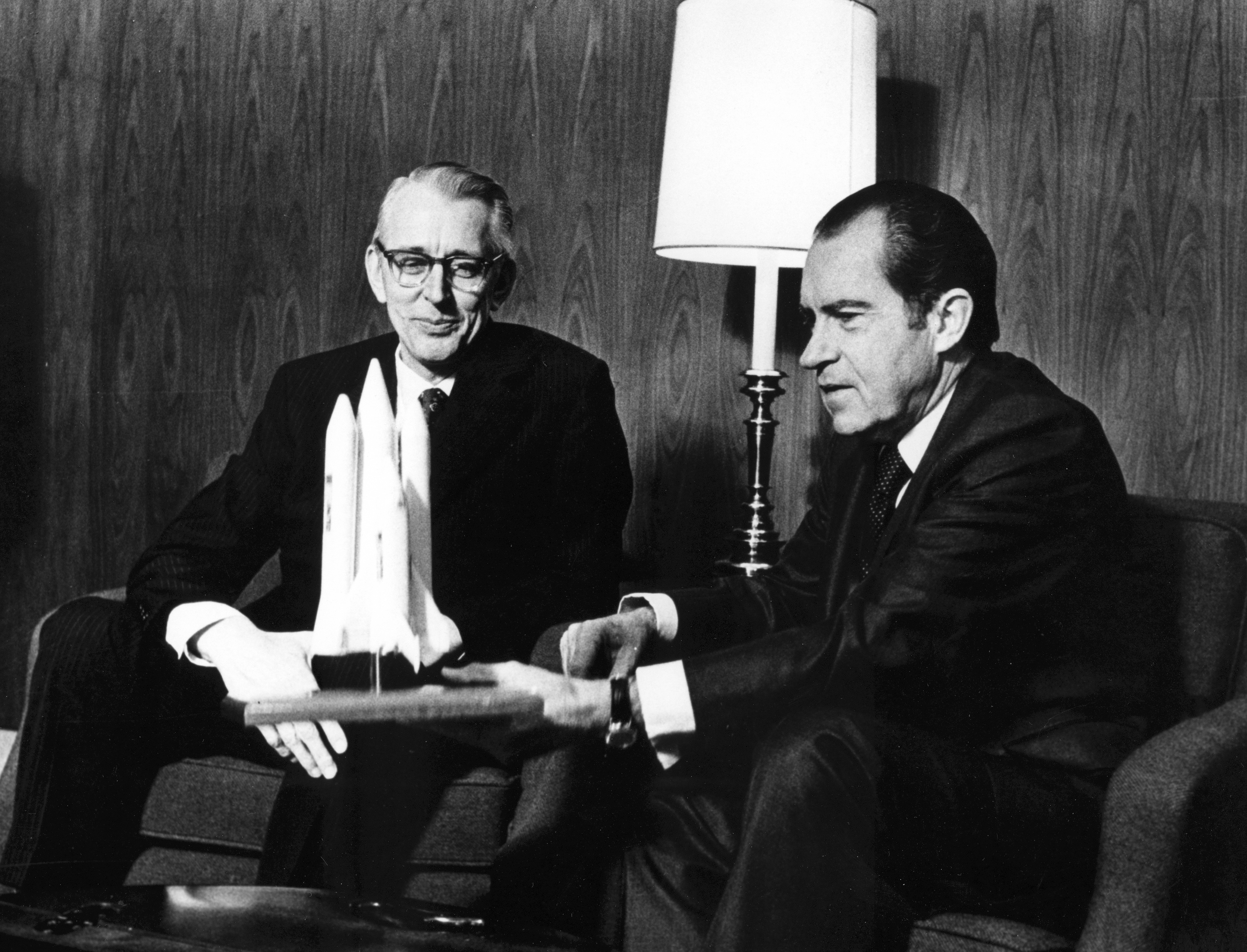 Endowed with the stunning success of the Apollo program, yet faced with the exorbitant costs of NASA, President Nixon considered a space policy shift in the second year of his presidency. On March 7, 1970, President Nixon made public his intention to redirect the NASA vision. He released a statement which detailed his administration’s approach to continued space exploration and research efforts at a more manageable cost to the nation.

We must think of [space activities] as part of a continuing process… and not as a series of separate leaps, each requiring a massive concentration of energy. Space expenditures must take their proper place within a rigorous system of national priorities. … What we do in space from here on in must become a normal and regular part of our national life and must therefore be planned in conjunction with all of the other undertakings which are important to us.

President Nixon was not necessarily paring down the efforts of the nation’s space program, but rather attempting to instill a withstanding national paradigm. It was his hope that space exploration would become a component of national priorities, in line with the nation’s many domestic programs and as a result a staple of American government. It would compete, along with other national programs, for the government’s limited resources.

President Nixon’s aim to reprioritize this “massive concentration” of energy given to NASA began when he created the Space Task Group to study the future possibilities of the space program in February of 1969. After several months of examination, the Space Task Group sent the Nixon administration their recommendations in October.

One of the principle recommendations by the Space Task Group included developing “low-cost, flexible, long-lived, highly reliable, operational space systems with a high degree of commonality and reusability.” In other words, NASA should be tasked with constructing something along the lines of a reusable shuttle.

The unveiling of the space shuttle program became reality at the beginning of President Nixon’s iconic year of 1972. On January 5, RN met with Dr. James C. Fletcher, NASA Administrator, to discuss the proposed space shuttle vehicle.

Shortly after the meeting, the President issued a statement announcing the commencement of the Shuttle Program, closing the book on the Apollo program and opening another for the future of space exploration.

This new program will give more people more access to the liberating perspectives of space, even as it extends our ability to cope with physical challenges of Earth and broadens our opportunities for international cooperation in low-cost, multi-purpose space missions.

On December 19, 1972, Apollo 17 reentered Earth’s atmosphere, marking an end to the prestigious and largely successful Apollo program. President Nixon shared a message with the American people about the future of the space program assuring that “the making of space history would continue,” albeit at a more steady and economically viable pace.

President Nixon described the possibilities the space shuttle would bring:

Economy in space will be further served by the Space Shuttle, which is presently under development. It will enable us to ferry space research hardware into orbit without requiring the full expenditure of a launch vehicle as is necessary today. It will permit us to place that hardware in space accurately, and to service or retrieve it when necessary instead of simply writing it off in the event it malfunctions or fails. In addition, the Shuttle will provide such routine access to space that for the first time personnel other than trained astronauts will be able to participate and contribute in space as will nations once excluded for economic reasons.

The Space Shuttle program, retired in 2011, continued for 39 years–the longest yet program launched by NASA. It produced 135 total flights and countless cutting-edge research missions. It is safe to say that space travel and exploration as we know it today was a result of President Nixon’s decision to economize the American space program in 1972.