55 Years Ago — “The Last Press Conference” 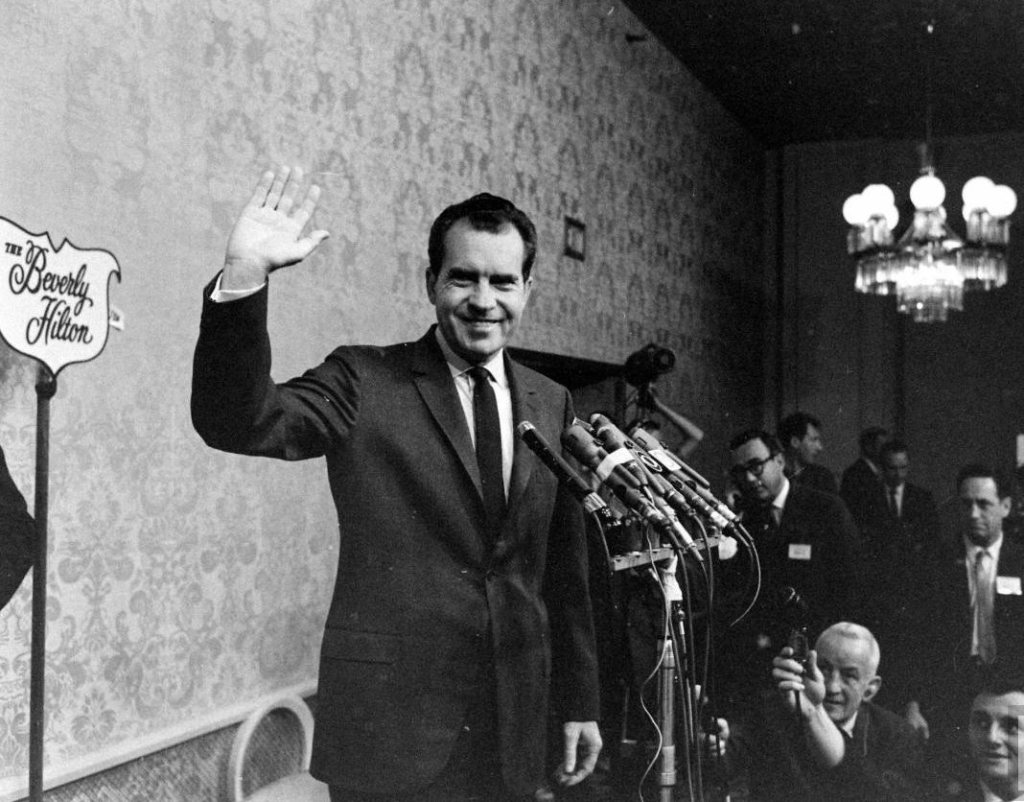 6 November 1962: Vice President Nixon gives his concession following his loss to Edmund “Pat” Brown in the 1962 California Gubernatorial race. He admonished the press in attendance for their disproportionate negative coverage of his campaign, and that this was his “last press conference.” (Richard Nixon Foundation)

After losing the presidency to John F. Kennedy in 1960, the rising political star of Richard Nixon seemed to fell into a state of limbo. Already having served in a variety of capacities in Washington, he finally decided to challenge incumbent California Democrat Pat Brown for his gubernatorial seat in 1962. Brown’s strong victory in 1958 and sustained popularity throughout his first term would make it difficult to construct a victory on Election Day. Trying to campaign on substantive issues, the press became increasingly attached to Nixon’s political past. The 1962 California campaign was the worst he had endured during his nearly two decade political career. “Every press conference brought questions about the personal attacks being made against me–I must have answered the question about the Hughes loan at least a hundred times,” Nixon would thereafter lament. “Reporters never tired of asking if I had repudiated the John Birch Society, or of having me reiterate my refusal to support Rousselot and Hiestand. There was no morning, afternoon, or evening that I did not deny that I was planning to use the governorship as a stepping-stone to a presidential candidacy in 1964.”

[scribd id=364443280 key=key-pJ9ZFYA4PtR0qoKqkZJG mode=scroll]
A young fan writes a letter of encouragement to President Nixon following his defeat in the 1962 California Gubernatorial race.

The overall campaign had lacked the dynamism of those in the past and Nixon had very little expectation of victory. Awaiting the election results at the Beverly Hilton Hotel through the night of 6 November, the next morning confirmed the worst. Indeed, the defeat had been sound. Following the council of his advisors, Nixon planned to release the text of his congratulatory telegram to Governor-elect Brown and while leaving the concession statement to his Press Secretary Herb Klein. Campaign frustrations combined with consecutive electoral defeats compounded into an especially emotional atmosphere. While embracing the staff who had tirelessly campaigned for him, Nixon caught a glimpse of reporters harassing and interrupting Klein as he struggled to give a statement. The press had not been satisfied. “Where’s Nixon?” they tirelessly demanded. Nixon had always had a special affinity for Klein. “He’s a gentleman in a business where there are damned few gentleman,” he later reminisced. Reaching a boiling point, Nixon headed to the lobby to confront those he believed had wrong him and disrespected his colleague.

Taking the elevator to the first floor Nixon turned and grieved to his accomplices, “Oh hell. It was a pretty good fight. We fought hard. We fought clean…Losing California after losing the Presidency – well, it’s like being bitten by a mosquito after being bitten by a rattlesnake.” There was no prepared statement. Channeling the turmoil of the unfair media treatment he had felt all of political life, what followed was a laundry list of complaints from the coverage of the campaign trail. In Conclusion, he foretold of a possible finality to his career in public service.

I leave you gentlemen now, and you will write it. You will interpret. That’s your right. But as I leave you I want you to know—just think how much you’re going to be missing. You won’t have Nixon to kick around anymore, because gentlemen, this is my last press conference, and it will be the one in which I have welcomed the opportunity to test wits with you. I have always respected you. I have sometimes disagreed with you. But unlike some people, I’ve never cancelled a subscription to a paper, and also I never will.

I believe in reading what my opponents say, and I hope that what I have said today will at least make television, radio, and the press, first recognize the great responsibility they have to report all the news and, second, recognize that they have a right and responsibility, if they’re against a candidate, give him the shaft, but also recognize if they give him the shaft, put one lonely reporter on the campaign who will report what the candidate says now and then. Thank you, gentleman, and good day.

In a predictable fashion, Nixon’s criticism of the media was not well received by those in the crosshairs. Painted as a personal and political disaster, the press jumped at the opportunity to pound the final nail into his professional coffin. “Barring a miracle,” one Time Magazine editorial prophesized, “his political career ended last week.” Airing on the Sunday following the election, ABC ran a half-hour segment titled “The Political Obituary of Richard Nixon” – which included a poorly received interview with his adversary Alger Hiss. The aggressive tone covering his defeat turned him from a loser to an injured party in the public eye. Nixon received thousands of letters praising his display of defiance, each one celebrating “someone finally had the guts to tell the press off” he wrote in his memoirs. Spending the subsequent years undergoing a philosophical deepening while refining his political stature, Nixon would engineer one of the greatest political comebacks in American history in 1968. From the depths of defeat he would ascend to the highest office in the nation, becoming the President of the United States.