Nixon on Gorbachev and Yeltsin 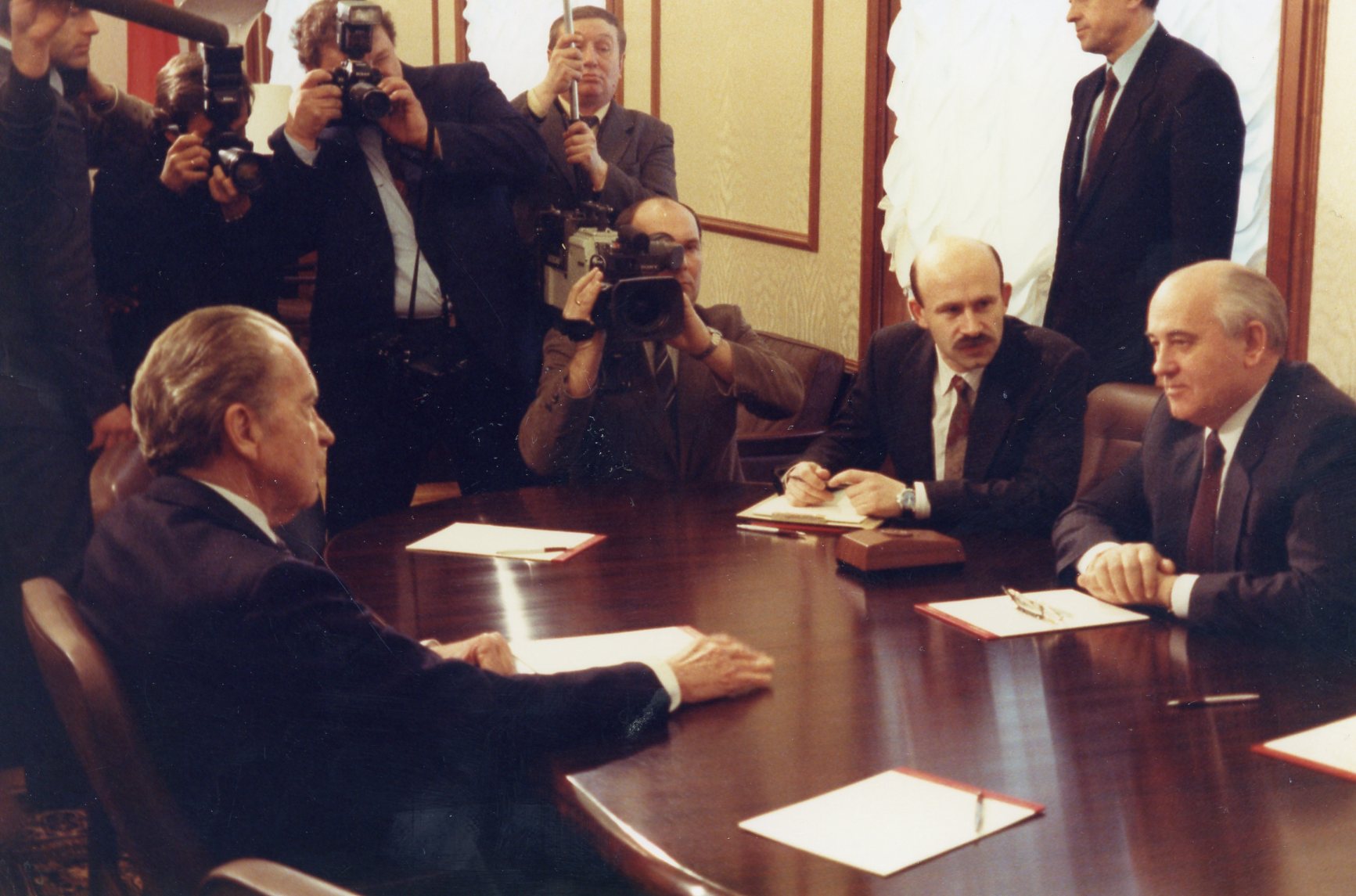 In an earlier article, we discussed former President Nixon’s advice to President George H.W. Bush about how to conduct war and diplomacy in the run up to the Gulf War. Bush largely followed his predecessors’ advice, and expelled Iraqi forces from Kuwait expeditiously.

“I sense, incidentally, that not just the Soviet military but the political leaders were shocked by our brilliant and quick military victory in the Gulf,” Nixon wrote to Bush in an April 1991 memo.

That month, Nixon had just returned from a 10 day fact finding trip to Russia where he met with leaders and discussed the current state and future of the country’s politics and economics. Among the notables he met with included Mikhail Gorbachev, president of the Soviet Union and general secretary of the communist party, and Boris Yeltsin, president of the Russia Federation.

In the twelve page memo, Nixon compared and contrasted the two, and made policy recommendations on how the U.S. should influence Russia moving forward.

Nixon called the current state of Russia rich in goods, but poor in spirit. Its people hadn’t seen much hope, as their horrifying past has been exposed by Glasnost, Gorbachev’s policy of political openness.

Nixon disagreed with the assessment of Kremlin watchers that the party secretary was cool under pressure, and a critical factor in influencing major events. He saw Gorbachev as “dead tired emotionally, mentally, and possibly physically” and unduly influenced by reactionaries who wanted to undo his earlier reforms.

“We liked the old Gorbachev,” Nixon opined, “but we have to face up to the fact we are now dealing with a new Gorbachev.”

Furthermore, Nixon believed that Gorbachev had a bad supporting staff of second raters, and yes men.

Conversely, he thought Boris Yeltsin was a pleasant surprise, and a very charismatic and powerful leader.

Whereas Gorbachev was “Wall Street ” and could dazzle intellectuals, Yeltsin was “main street” and could move the masses.

However, Nixon believed that Soviet experts missed the point by focusing too much on style. Yeltsin was now the cutting edge reformer:

Yeltsin has totally repudiated the communist party; Gorbachev has not.

Yeltsin is for immediate independence for the Baltics and for Georgia; Gorbachev is not.

Yeltsin is for immediately cutting off all economic and military aide to Cuba, Afghanistan, and Angola; Gorbachev is not.

Yeltsin is totally committed to gaining power by winning a free election; Gorbachev will not take this chance.

Nixon then advised on the direction of U.S. foreign policy.

Nixon’s view was that U.S. policy makers were disproportionately focused on arms control and not on encouraging reform within the federated republics. And while he believed in the devolution of power, he wanted to be sure that the rapidly declining relevance of the Soviet Empire wasn’t actually a dangerous degeneration toward isolation and instability as it would only encourage reactionaries — equipped with nuclear weapons — to pursue “a more belligerent foreign policy.”

Ultimately, Nixon believed that reformers needed to be strengthened to offset reactionary forces, and look for alternatives beyond Gorbachev.

Much of what Nixon laid out came to fruition.

In June 1991, Yeltsin was elected president of the Russia Federation. Two months later, reactionary forces attempted a coup against Gorbachev, which was dramatically and successfully thwarted by Yeltsin. By the end of the year, Gorbachev dissolved the Soviet Union.

Nixon concluded on a positive note, recalling his exchange with Soviet Premier Nikita Krushchev in 1959 during the infamous “Kitchen Debate.” Krushchev poked his finger into then Vice President Nixon’s chest telling him that his grandchildren would live under communism. Nixon responded, “Your grandchildren will live under freedom.”

“I believe that there is now a very good chance that Krushchev’s grandchildren will live in freedom,” Nixon wrote to Bush. “But this will happen only if the United States under your leadership plays the leading role.”

Read the whole memorandum below: