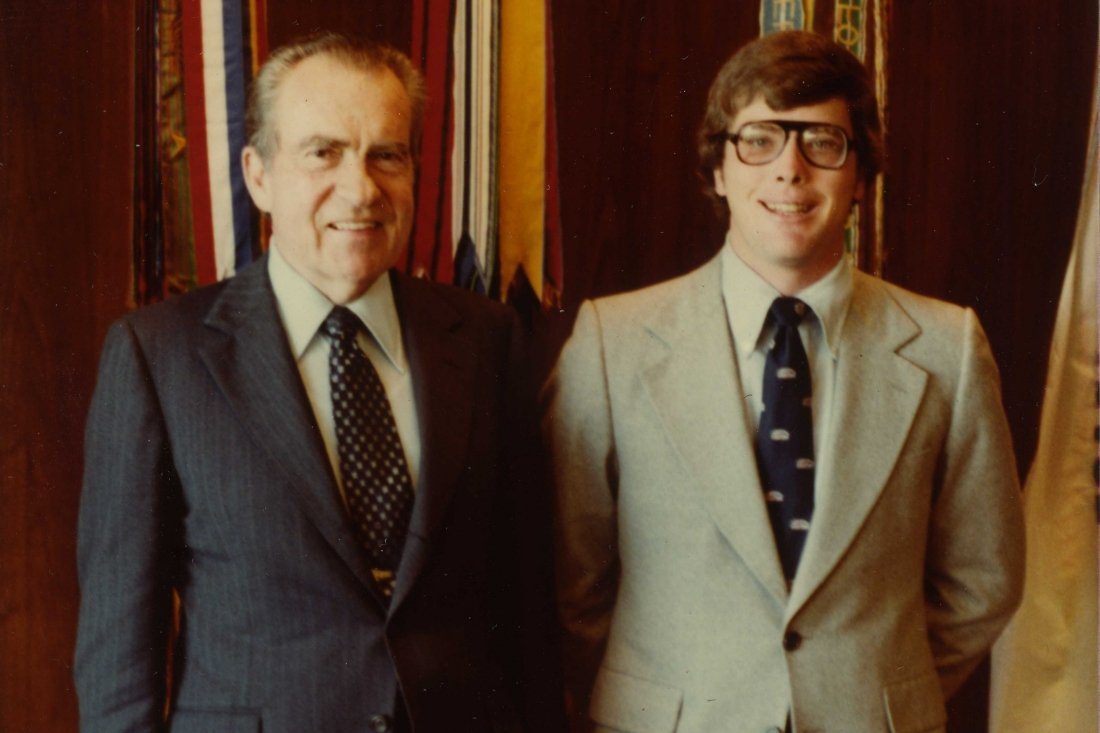 The Richard Nixon Foundation will soon be led by Hugh Hewitt, the man President Nixon hired as a researcher from Harvard University 40 years ago and tasked with building and opening the Richard Nixon Presidential Library and Museum in Yorba Linda nearly 30 years ago.

“The Richard Nixon Presidential Library and Museum recently underwent a complete renovation, and the new, interactive museum galleries enjoy increased attendance and positive reviews,” Cavanaugh said. “Hugh will lead the Nixon Foundation in its exciting next phase of growth, expanding its presence through national programming with an emphasis on articulating the Nixon legacy of pragmatic realism in domestic and foreign affairs.”

Cavanaugh added, “It’s been 50 years since Richard Nixon’s inauguration as President, and 25 years since his passing; it’s time to consider and judge President Nixon on the totality of his life and career, and Hugh will help to make that happen.”

Hewitt will continue to host The Hugh Hewitt Show, his weekday morning radio show on the Salem Radio Network, write frequent columns for the Washington Post and appear as a panelist on NBC’s Meet the Press.

Hewitt will split his time between Washington, D.C. and Yorba Linda. He and his wife of 36 years, Betsy, have homes in the D.C. area and Orange County.

“I am honored to be invited back to serve the legacy of President Nixon,” Hewitt said.

“Richard Nixon was a grand strategist and master diplomat, and his vision is exactly what is needed today as America faces challenges and opportunities with China, North Korea, Russia, throughout the Middle East and elsewhere,” Hewitt added.

“The world needs to be reminded of President Nixon’s lasting foreign policies, the strategic methods by which he assessed conflict and disagreement, and how he crafted strategies for resolution — building a more peaceful world.”

“I have a great respect for President Nixon and am deeply admiring of his lasting accomplishments; in fact, he started my career — and now there is great work to do in service to his legacy.”

“We are delighted to welcome Hugh home to Yorba Linda,” President Nixon’s daughters Tricia Nixon Cox and Julie Nixon Eisenhower said in a joint statement. “Fifty years ago, our father became the 37th President of the United States and set out to bring peace where there was discord — and he did. During this important 50th anniversary year, we are most excited about the emphasis that Hugh, as President of the Nixon Foundation, will place on education and scholarship: creating a national programming presence for the Nixon Foundation, and building closer cooperative relationships to continue to positively shape our father’s legacy.”

“He is the perfect fit for this task,” they said.

Hewitt succeeds William H. Baribault, of La Canada Flintridge, who has led the Nixon Foundation since 2014. “Hugh Hewitt is a terrific choice, and he brings a unique combination of experience and knowledge to lead the Richard Nixon Foundation in its next chapter of growth,” Baribault said.

“We are indebted to Bill Baribault for his dedicated leadership over the past five years,” Cavanaugh said. “Bill reinvigorated collaborations and built new partnerships with institutions and universities, and he leaves the Nixon Foundation with an impressive list of important, lasting achievements that have benefitted the legacy of Richard Nixon. We wish him and his family all the best.”

Hewitt is a tenured Professor of Law at Chapman University’s Fowler School of Law, a columnist for the Washington Post and host of his own popular nationally syndicated show on the Salem Radio Network, The Hugh Hewitt Show. He was a panelist on four CNN Republican Primary Debates in 2016 and is a frequent panelist on NBC’s Meet the Press.