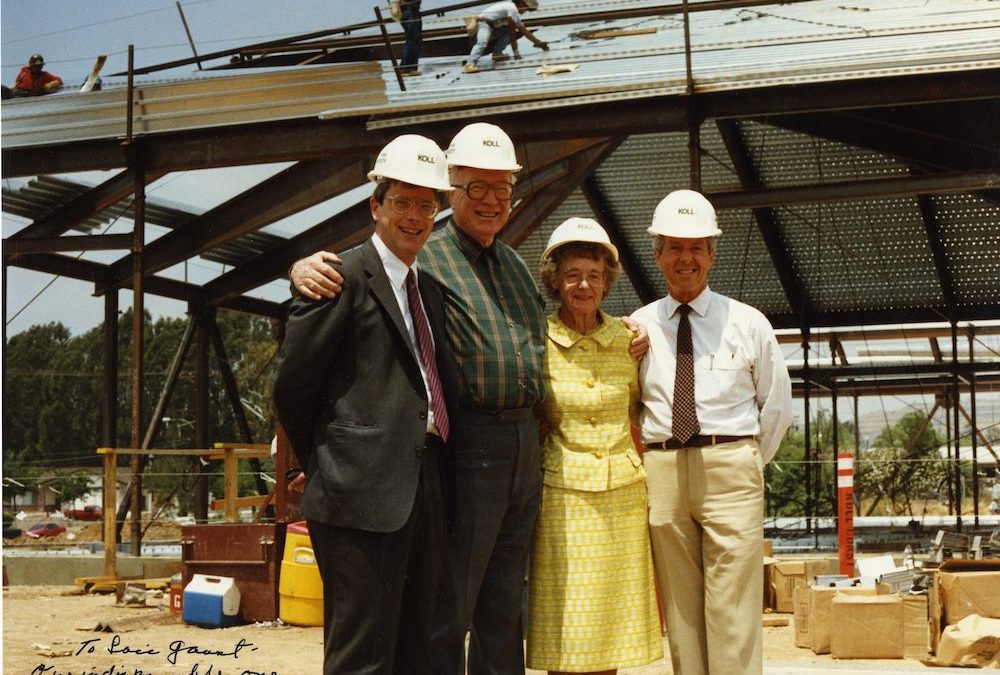 Photo: Loie in 1989 with Executive Director Hugh Hewitt, Treasurer Jack Drown and Board Member Don Bendetti as the Nixon Library was constructed. The photo is signed by RN: “To Loie Gaunt – Our indispensable one.”

Statement from
The Family of President and Mrs. Richard Nixon
On the passing of longtime Nixon family friend and aide
Loie Gaunt

“There is nobody who loved and served Pat and Richard Nixon more faithfully and loyally than did Loie Gaunt. She loved our family as if we were her own family, and we loved her back. She was a calm, kind, steadfast friend for countless important, history-making moments throughout our lives. We are forever grateful for her lifelong, selfless devotion to our family and for her 30 years serving the Richard Nixon Presidential Library and Foundation.” 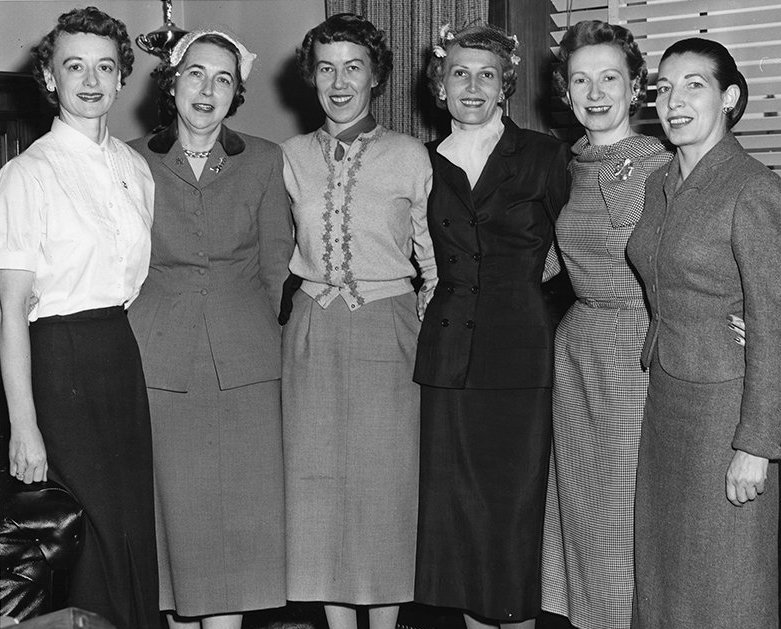 Loie Grace Gaunt, the longest-tenured and oldest-living member of Richard Nixon’s staff, passed away peacefully with her family nearby, at home yesterday, June 26, in Tustin, California. She was 98.

Loie began her lifelong journey with Richard Nixon when she joined his Senate staff in 1950. This began a career of service to Pat and Richard Nixon, the Nixon family, and the Richard Nixon Foundation that spanned 70 years.

She served on RN’s Senate staff from 1950 to 1953; when Senator Nixon assumed the Vice Presidency, Loie was named manager of the Vice President’s office in the Eisenhower administration, a senior, important post in which she served dutifully for eight years. She was a key member of the Nixon presidential campaign of 1960 and California gubernatorial campaign of 1962, and spearheaded the formation of the Richard Nixon Foundation after RN was elected president in 1969.

She remained with the Nixons after the White House, managing the family’s personal affairs in San Clemente as RN wrote his Memoirs.

Loie later served as a key decision-maker in the planning, building, dedication and grand opening of the Richard Nixon Library & Birthplace, working directly with the former President and First Lady to shape the iconic complex and opening day celebrations.

On the Library’s opening day in July 1990, President Nixon thanked Loie for “not giving up on the Library.”

For 30 years, she faithfully served the Board of Directors of the Nixon Foundation as Assistant Treasurer and made regular visits to the Nixon Library until the end of her life.

A private memorial service will be held soon in the Pat Nixon Gardens of the Nixon Library next to the Birthplace of the President she served for seven decades, near a bench named in her honor, as soon as restrictions are lifted on holding such events. Loie will be buried at Fairhaven Memorial Park in Santa Ana, California.

In lieu of flowers, Loie’s family requests that memorial contributions be sent in her name to the Richard Nixon Foundation at 18001 Yorba Linda Blvd., Yorba Linda, California 92886; contributions can be made online here.

“Lovely, very wise but ever gracious, and generous, and my God loyal! It’s almost impossible to think of the President or Mrs. Nixon or Tricia or Julie without thinking of their devoted friend, Loie. In fact any of us fortunate enough to know and spend time with this kind, sweet, good woman were truly privileged to do so.”

“It was my honor to have worked alongside Loie 42 years ago in San Clemente, decades after she had first begun assisting President and Mrs. Nixon. She was essential to the opening and running of their Library. She was the most faithful of supporters and diligent of friends. Loie will be missed by all.”

-Hugh Hewitt, President and CEO of the Richard Nixon Foundation

“Loie was a wonderful woman and she was so important to the Nixon Family… she cared for each member…she loved the Library and worked hard to make it special and DID! Rest in Peace.”

“Loie’s life centered around her family, and that of Richard Nixon. She was always there, serving ‘The Boss’ with unconditional loyalty and dedication. She loved her work and she loved America, so we can say Loie led an extraordinary and exciting life witnessing and being part of great events in the circle of one of the most history-making leaders of our time.”

“It is totally true to say that since I have known Loie since I was in my early 20’s, her inspiring dedication and loyal service to the Nixons has made me a better person. God bless Loie – one of a kind.”

-Maureen Nunn, Board of Directors

“I first met Loie in the 1962 campaign. And when that campaign ended and I was far away from home without work, she hired me to help clean up files in RN’s office and process the avalanche of mail that came in after the Howard K, Smith television program, “The Political Obituary of Richard Nixon”, on which he had the infamous spy Alger Hiss to comment. She was a kind and gracious person whom I recalled fondly all through the years. She was one of a kind.”

-John H. Carley, Board of Directors 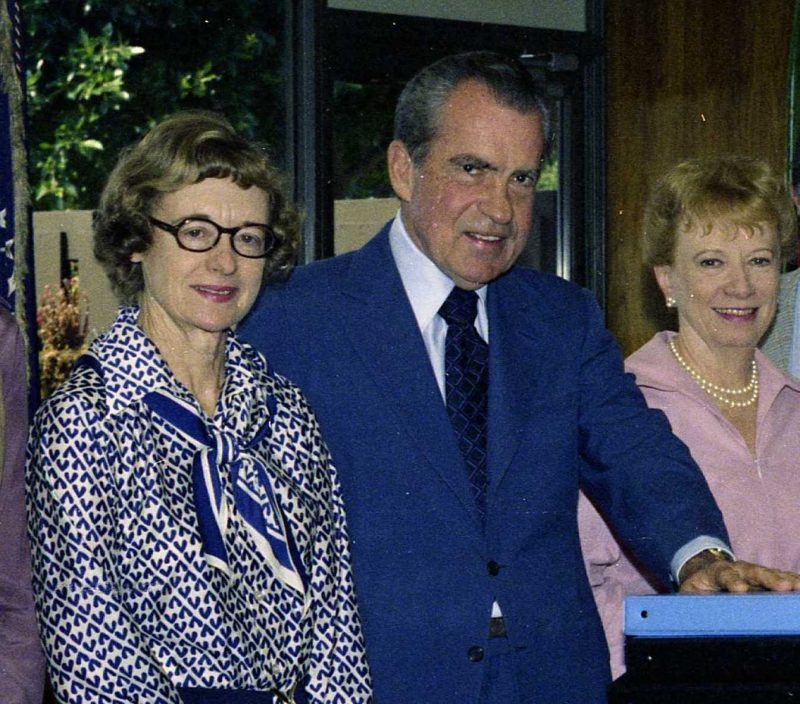 Loie, RN, and Rose Mary Woods at the President’s office in San Clemente.

While working with the Boss on the post-presidential compound in San Clemente, I would often arrive to find a note on my desk inscribed with the set of initials second only in familiarity to RN’s: the neatly written letters, LGG. They belonged to the only other truly indispensable person who showed up every workday to coordinate what was called the Office of Richard Nixon. Loie Grace Gaunt.

I thought I was pretty cool – having been around RN since the 1968 campaign – until I discovered that Loie Grace went back to his 1950 Senate office. And from that time until she left this earth, she gave to the President and everyone around him the most wonderful attitude, unfailing service, and undaunting spirit imaginable.

Loie commuted each day from Garden Grove, nearly 40 miles, and still beat every one of us into the office. When some strange name called in claiming to know “Dick” from the Jerry Voorhis campaign, Loie had the answer. If we needed administrative help to unclog the machinery of process, we turned to Loie. If the Boss scolded us for our work ethic or missing a deadline, we could count on Loie to salve our wounds, because she had done the same for dozens of other young twerps over the years.

And, there was her smile and her warmth. How could anyone possibly be so sunny and pleasant, not just some days, but every day? If Roget was around long enough to add a word for loyalty, Loie Grace Gaunt would be an addition to the Thesaurus. In those years, especially, from 1974 to 1980, it was never easy – not just one day, but every day – and through it all Loie personified the extraordinary qualities of fidelity and allegiance upon which the President, Mrs. Nixon, Tricia, Julie and all of us around him could depend without question.

When we worked to open the Library in 1990, Loie was at every “countdown” meeting. Never a critic, only a helping hand. She only gave, and never asked for anything back. Our Foundation, and the entire Nixon extended family owes so very, very much to Loie Grace Gaunt, an irreplaceable, indomitable spirit that will live in each stone laid at the building which carries the name of the Boss to whom she devoted her life.