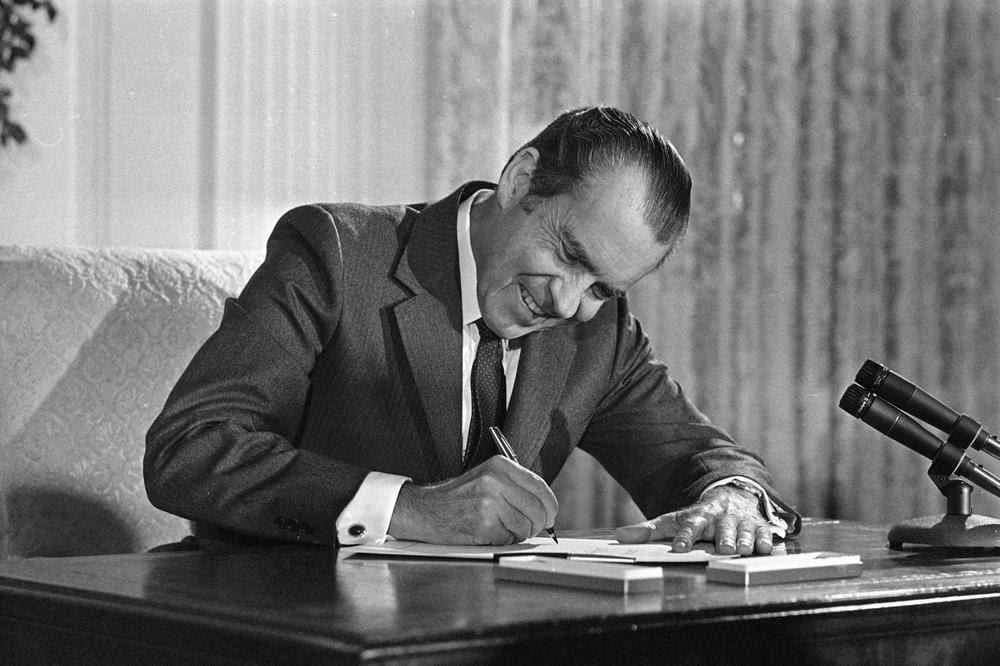 Two-day meeting of experts this December will examine past, present and future of cancer treatment and research

YORBA LINDA, CA — The Richard Nixon Foundation will host a two-day commemoration of the 1971 National Cancer Act at the Richard Nixon Presidential Library and Museum in Yorba Linda, California, on December 1 and 2, 2021.

Hewitt said, “President Nixon was a visionary when it came to cancer. He was determined to save current and future lives and advance knowledge by applying the powerful focus of the federal government in order to jumpstart cancer treatment and research. In the spirit of President Nixon’s vision and commitment to research and collaboration, our two-day commemoration will be a non-partisan and non-fundraising event.  We will assemble physicians, clinicians, researchers, experts, academics, authors, journalists, political and public health officials, philosophers, ethicists, activists –the entire universe of cancer minds– to assess the past, analyze the present, and envision the future of cancer treatment and research.”

Hewitt announced that the commemoration will be chaired by Dr. Andrew von Eschenbach, who was Director of the National Cancer Institute from 2001-2005, and Commissioner of the Food and Drug Administration from 2006-2009. Hewitt said, “We are proud and honored that Dr. von Eschenbach will Chair this 50th-anniversary commemoration. His combination of knowledge, experience, and wisdom is a unique resource.”

Dr. von Eschenbach noted: “I am honored to Chair this celebration in gratitude for President Nixon’s visionary leadership. Throughout my career at MD Anderson Cancer Center I witnessed the transformational progress in research and advances in the care of cancer patients that was made possible by the provisions of the National Cancer Act of 1971.”

Nixon Foundation Chairman Dr. James H. Cavanaugh noted: “Beginning in 1971,  I served as President Nixon’s staff assistant for Health Affairs. During that time I was privileged to represent the President in the planning that led up to the signing of the National Cancer Act of 1971. The former President considered his national cancer initiative to be perhaps his greatest achievement. In many respects, this commemoration is a tribute to his vision and determination.”

The Foundation will, in the coming weeks and months, announce additional details including names of distinguished guest speakers, and members of discussion panels and programs are now being finalized.

The Nixon cancer initiative, which was passed with bipartisan support, broke new ground by proposing increased federal funding to be allocated for research and treatment on one specific disease. President Nixon signed the National Cancer Act of 1971 at a ceremony in the East Room on December 23, 1971. He said, “I hope in the years ahead we will look back on this action today as the most significant action taken during my Administration.”

The media quickly dubbed the initiative “Nixon’s War on Cancer.” President Nixon never used that term himself because he understood that saving more lives while trying to find a cure for cancer was going to be a long, slow process that would require patient research and persistence.

Because December 23rd is so close to Christmas, this commemoration will be held at the beginning of the month on December 1st and 2nd (Wednesday/Thursday). It will combine on-site speakers and events with virtual participants from across the country.

Regarding the importance of Nixon’s initiative, Hewitt quoted the National Cancer Institute’s assessment:

“There have been few events that have had as remarkable and long-lasting an impact on how cancer is studied, treated, and even contemplated as the National Cancer Act of 1971. Signed just a few days before Christmas by President Richard Nixon, the act created a national commitment to making progress against cancer by anticipating and creating the infrastructure and mechanisms needed for a large-scale, world-class cancer research enterprise.”

As a result of Nixon’s initiative, fifteen designated cancer centers received an unprecedented amount of $1.6 billion ($9 billion in today’s dollars) for cancer research over the following three years.