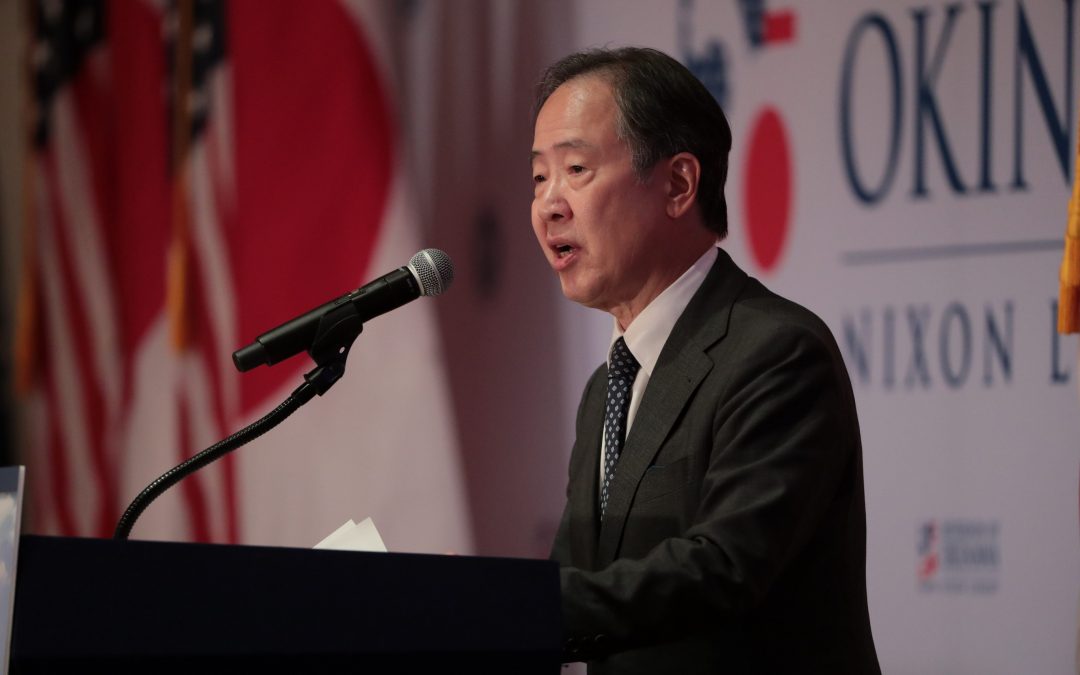 50th Anniversary of the Announcement of the Reversion of Okinawa Agreement

Remarks by His Excellency Koji Tomita,
Japanese Ambassador to the United States

I took up my post back in January, a week after the inauguration to be precise. And since then, you know, I was feeling rather reticent going out of Washington because of pandemic. But as things are getting back to normal, I am starting to feel less constrained. So a few weeks ago I ventured out of Washington and very cautiously went to the state of Indiana, and then I was invited by the State Governor to watch the Indy 500 auto race. And I saw 140,000 people, almost without masks, enjoying themselves hugely, and I thought that things are getting back to normal.

So I’m here today, you know, with a great deal of confidence, and it’s a really important opportunity for me to be able to connect with the state of California with which as you know Japan has a very long tradition of close bond. And of course, I very much enjoyed the tour the library kindly gave me a little earlier.

And incidentally I’m something of a mature historian and I published two biographies of British Prime Minister Winston Churchill and Margaret Thatcher in Japan, and my secret ambition is to write another book on American leader, and if I do that I think that Richard Nixon would be the prime candidate. So, you know, coming here is an element of a research trip, and, you know, the tour of the library really whetted my appetite. But that being said, I’m afraid that project has to wait for the time being because if I start writing a book a few months after the start of my duty I think I would be accused of being negligent in my duties in Tokyo, so I think I’ll wait a little bit before I start anything.

I have been asked to speak about President Nixon and the 50th anniversary of the signing on June the 17th of 1971 of the agreement that returned Okinawa to Japan. But let me start a little more broadly than that.

Ask yourselves, what was Richard Nixon’s connection to Asia? I suppose the first connection was his navy service during World War II where he was stationed on Guadalcanal in the South Pacific for a time. I can’t imagine how that experience influenced his views, but as you know, there were thousands of death and great destruction during this period. But what really reveals to me his connection and his interest was a tour of Asia he made in October of 1953 as Vice President, including a visit to Japan. This occurred just months after he and President Eisenhower were inaugurated.

The Vice President even visited Okinawa, but what caught my eye was a luncheon speech he made to The America-Japan Society in Tokyo. He was a very young Vice President at the time as you know. When he went on that tour, he was only 40 years old, and yet the speech had an expansiveness to it and a boldness. He even said that the U.S. made a mistake in 1946 in pushing for Japanese disarmament.

But here is a point I want to make. My proposition to you today is that Richard Nixon was the first major American elected official to truly see the importance and potential of Asia.

The only other American President or Vice President before President Nixon that comes to my mind would perhaps be President Millard Fillmore who sent out Admiral Perry sailing into Tokyo Bay in 1853 exactly 100 years before Richard Nixon’s tour.

Now why do I say then by Vice President Nixon was the first major national political leader to see the importance of Asia? Let me quote to you some of his own words from that Tokyo speech. He said that “The Eisenhower administration recognized,” I quote, “The basic fact that what happens in Asia is just as important as what happens in Europe.” That is a remarkable thing to say.

From American perspective back then, Asia did not share history with the U.S. as Europe did. We did not share culture. We did not at that time share the economic ties that had developed between the U.S. and Europe over a couple of hundred years. Most of Asia at that point was a developing part of the world, and yet there is a statement what happens in Asia is just as important as what happens in Europe.

He also said in the same speech, “Japan was a key bastion in the defense of freedom in Asia.” Now part of this related to the purpose of his old trip which was to bolster America’s standing in Asia in the face of the Cold War. And another reason he said this, I hope, was that American leaders looked to a day when Japan would emerge from the lavages of the world and become a prosperous and contributing member of the democratic nation that formed the bulwark against communism, and communism was a major theme of his speech that day.

He also expressed his desire for a place of Japan in the United Nations. Japan was admitted into the UN only in 1956, three years after this speech. This statement tells me that he and the administration somehow foresaw the international role that Japan could play. It is a role that we have grown into today, and it is in so many ways beyond the United Nations. Back then it was a vote of confidence which Japan needed.

In short, the Vice President addressed Japan as a nation that belonged in the community of nations. He addressed Japan as a nation whose influence for peace and prosperity would be welcome and important. He spoke to us as a nation that had a role to play in Asia and in the world. This was one short year after the end of the occupation and the return of Japanese sovereignty. It was seven years before the U.S. and Japan would have a security treaty.
On the Vice President’s Asian tour, he also visited Hong Kong and the countries around China, and I wonder how that influenced his famous opening to China. He visited Vietnam and Cambodia and Laos, and I wonder how he reflected on those meetings when nearly 20 years later as President he thought to extract the United States out of Vietnam, and I wonder in what way his visit to Okinawa influenced his decision on its reversion to Japan years later.

So how did the reversion come about? Saying it was made possible a growing understanding between two nations is a bit vague. I believe it was made possible by the hard political decisions on the part of President Nixon and Prime Minister Satō after very difficult negotiations. Dr. Kissinger was directly involved in the negotiations on the reversion, and if he were here, I would express my deep appreciation to him for his efforts.

There is also no denying the tensions of the time. There were wounds from the war on both sides that had not healed. Suspicions lingered, and naturally so. Japan and the United States had not yet established the close and warm relationship we have today.

Treaties are often tricky things. In 1960, there were massive street demonstrations in Japan, even political upheaval after the signing of the Treaty of Mutual Cooperation and Security which updated the treaty of 1952. The cabinet resigned a month after the Diet ratified the treaty in 1960. Things had quieted down by 1971, of course, but there were tensions over U.S. bases among the people of Okinawa. Okinawa is not just an island. It’s extremely important geographically in terms of security then and now. During World War II, it was known as a keystone of the Pacific. The reversion treaty said that Okinawa prefecture would be returned to Japan and the United States would still have access.

During the negotiations there were difficulties about the date of reversion and complications regarding the feelings of local people about the presence of the U.S. bases and troops. Radical students who didn’t want the U.S. in Okinawa rioted in Tokyo with Molotov cocktails and steel pipes. A police officer was even killed. On Okinawa itself, there was Koza Riot in 1970. Koza is the name of place. The riot that ensued carried on for 7, 8 hours into the night and 5,000 Okinawans and 700 MPs were involved. In the morning, 60 Americans and 27 Okinawans were injured to varying degrees.

Now, why do I mention all this? Because it shows these were not just dry and formal diplomatic negotiations. These are political and security implications for both sides. The measure of trust and courage was demanded on both sides. President Nixon and Prime Minister Satō each saw what needed to be done for the future and the security of our relationship and they did it. They reached an agreement.

Today, of course, many facilities and areas remain dedicated to U.S. forces in Japan. The tensions resulting from this presence will flare, especially when something unfortunate occurrence happens. It is the policy of Japanese government to work to mitigate the impact on Okinawa while working to maintain a strong deterrence posture by the U.S. forces in the region. As Japan has increased its vision of its defense needs over the years, I think President Nixon would be very pleased. He would be pleased to see such advances as a recent legislation for peace and security under the Abe administration which allows the exercise of the right of collective self-defense under certain requirements. He would be pleased to see how closely today American forces and Japan self-defense forces cooperate and train together and the level of integration that we have achieved. He would be also pleased with Prime Minister Suga’s visit to the United States on April the 16th as President Biden’s first foreign guest and a clear statement of the United States unwavering support for Japan’s defense under the U.S. Japan Treaty of Mutual Cooperation and Security, and reaffirmation of the fact Article 5 of that treaty applies to Senkaku Islands. President Trump also had made this pledge.

Former National Security Adviser for the President Mr. O’Brien, who was participating in today’s event, has been instrumental in strengthening the Japan-U.S. relations and I would like to express my gratitude to him.

Let me close my remarks with this thought. My motivating mission as Japan’s Ambassador is to build relationships with the new administration and various other leaders and to further those policies that strengthen our alliance and promote mutual understanding between two countries. With President Nixon’s international vision as my model, I will do my best to live up to his example.