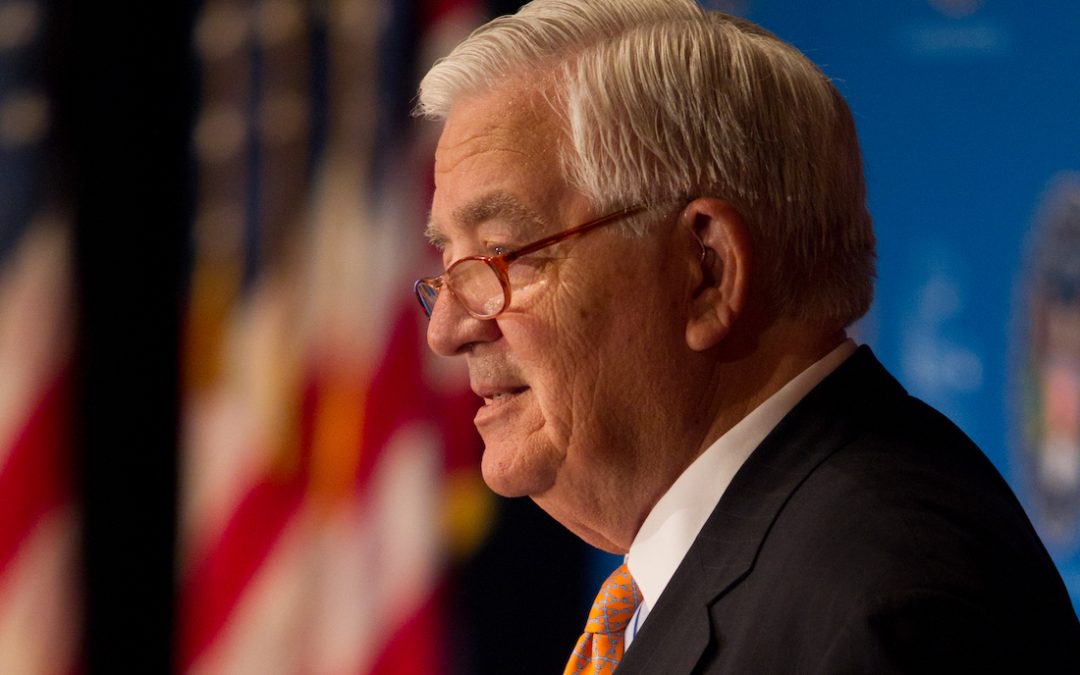 James Harvey Falk, Sr., 82, of Reston, Virginia, passed away peacefully on May 13, 2021, surrounded by his children. He was born on August 17, 1938, in Tucson, Arizona, the youngest of seven children to George Falk and Elsie Laura Higgins Falk. He attended Tucson High School and attended the University of Arizona, graduated from the University of Arizona earning a B.A., where he was also a member of Phi Delta Theta. He received an LLB from the University of Arizona College of Law. He married Bobbie Jo Vest in 1960, whom he met when he was 5 years old. They lived on the same block and their families attended the same church. They later attended the same elementary school, high school, and college before marrying. In 1976, he built a family farm in Great Falls — Cornwell Farm — where the family lived for 40 years. Last year, they celebrated their 60th wedding anniversary. Bobbie Jo, the love of his life, passed earlier this year.

Jim was first admitted to the Arizona Bar Association in 1965 and was hired by El Paso Natural Gas. He worked for Senator Barry Goldwater at the 1964 Republican Convention and was an organizer of the Goldwater Girls. In 1966, he was named Assistant City Attorney in Tucson, Arizona, where he served before joining the law firm of Waterfall, Economides, Falk and Caldwell in 1969. He was elected as the first Chairman of the Tucson Transit Authority in 1970.

While chairing the Tucson Transit Authority he met with White House Counsel Ed Morgan, a city attorney and law school friend, and William H. Rehnquist, a Phoenix attorney and later Chief Justice of the Supreme Court. Morgan and Rehnquist—at the time working at the Justice Department as Counsel—were instrumental in Falk joining the Domestic Council for President Richard Nixon. In 1971, he began in that role working on welfare reform and revenue sharing and he was later promoted to Associate Director of the Domestic Council and Office of Intergovernmental Affairs working with governors and local officials.

Falk became a part of history when asked by President Nixon and Secretary of State Henry Kissinger to lead the Third American Delegation to the People’s Republic of China, a bipartisan delegation of governors including Phillip Noel of Rhode Island, Daniel Evans of Washington, Calvin Rampton of Utah, Arch Moore of West Virginia, Robert Ray of Iowa, and Marvin Mandel of Maryland.

In 1976, after serving on the Bicentennial Commission, he resigned from his White House position. In a letter to Falk, President Ford said, “You have served with devotion and great distinction and I look forward to your future service.” Falk praised President Ford “for restoring the faith of the American people in their government.” He then joined the Washington office of international consulting and accounting firm Touche Ross. He later co-founded the law firm of Coffey, McGovern, Noel.

A highly respected and successful Federal Court lawyer, he founded the Falk Law Firm, working with sons James Jr. and John and his wife Bobbie Jo. Jim enjoyed an enviable list of domestic and international clients and was considered one of the top government contracts lawyers in the United States. He also served in advisory roles for the D.C. Bar and As a constitutional law expert for the Less-Than-Lethal Technology Panel of the National Institute of Justice at the U.S. Department of Justice. Falk was very proud of his service as an Adjunct Professor of Law at George Washington University School of Law for 20 years, where he taught along with his sons James Jr. and John. He was a member of the District of Columbia Bar Association, the U.S. Supreme Court Bar Association, the U.S. Court of Appeals for the Federal Circuit and the International Association of Defense Counsel.

In addition to his distinguished professional career, Jim became an avid and winning thoroughbred racehorse breeder and owner, operating Cornwell Farm and Rosebud Racing Stables. He was a long-time member of the Virginia Thoroughbred Association and was awarded the Virginia Thoroughbred Association’s Breeder of the Year award and was the proud breeder of, among others, Midwatch, Aix En Provence, Parisiana, Daylight, Daytime, King City, Copper Strike and Bear Down!

James Falk was a proud American Patriot and is survived by his son John M. Falk of Charleston, South Carolina and his daughter Kathryn Falk of Reston, Virginia, along with his grandchildren whom he deeply cherished, Jack M. Falk of San Francisco, California, Olivia G. Falk of Baton Rouge, Louisiana, Grayson T. Falk of Vero Beach, Florida, and Julia T. Brandus, of Reston, Virginia, along with his son-in-law Paul Brandus. In addition to being preceded in death by his beloved wife, he is also preceded by his eldest son, James H. Falk, Jr.

A private family service to honor his life will be held at Trinity Episcopal Church in Upperville, Virginia and he will be laid to rest next to his wife Bobbie Jo and son James Jr. In lieu of Flowers, donations may be made in his memory to Trinity Episcopal Church, P.O. Box 127, 9108 John S. Mosby Highway, Upperville, Virginia 20184 and at https://trinityupperville.org/give.