On May 13, 1958, while on a trip to Latin America, Vice President Richard M. Nixon found his limousine under attack by an angry mob in Caracas, Venezuela.  The incident was so provocative that President Eisenhower ordered elements of the 101st Airborne Division to mobilize, as well as sending an aircraft carrier to Venezuelan waters.  When the Vice President landed at Washington National Airport a few days later, he and his wife Pat were met by a crowd of more than 15,000 well-wishers, led by the President himself, plus members of the cabinet and congress.

Significant among the throng was Senate Majority Leader Lyndon B. Johnson (D-Texas), who threw his lanky arms around Nixon in a Texas-size hug.

A few years earlier, in July of 1955, Mr. Nixon had visited Bethesda Naval Hospital to see this same tall Texan, a man whose life and career had already intersected with his, though the most significant parallel remained a matter for the future. Johnson had suffered a serious heart attack while visiting friends in Middleburg, Virginia.  It rocked his world. He was only 46 years of age and was facing the fact that his ambitious career might be over.  He was very depressed.

Richard Nixon had planned to spend only a few minutes in Johnson’s room, but wound up staying for over an hour.  Their conversation became serious after initial pleasantries.  They had a friendly and animated conversation about a wide range of subjects.  Though the two men had served together in the House of Representatives in the years immediately following World War II, and then later in the Senate, something changed that day. One LBJ biographer wrote decades later that this particular moment marked “the beginning of a close relationship between two future presidents which is only now beginning to be glimpsed by historians.”

Last December, David and Julie Nixon Eisenhower appeared at the National Archives in Washington, D.C. to promote their book, Going Home to Glory: A Memoir Of Life With Dwight D. Eisenhower, 1961-1969. Seated near the front of the very full auditorium were Charles and Lynda Bird Johnson Robb—he a former U.S. Senator and Governor (D-Virginia) and she a daughter of President Johnson.  Julie and Lynda Bird greeted each other like long lost friends, not to mention heirs to two political giants who had towered over their turbulent times.

RN and LBJ had many things in common and many other things in contrast.  Both were self-made men, rising from humble beginnings to the pinnacle of power.  Both received a great deal of criticism and harsh treatment from segments of the public and press.  Both men were Cold Warriors, having shared the common generational experience of service in the Second World War, Johnson as a commissioned officer in the Naval Reserve and Nixon commissioned as an officer in the United States Navy.  Both men lead the country during the years when the Vietnam War tore away at the national fabric.  Both men received monumental political affirmation through record electoral landslides.  Both men believed in the art of personal diplomacy often conducted far from the daylight of public scrutiny.

And both men left office as widely unpopular figures, looking forward to the more objective verdict of history.

On the other hand, they were fiercely partisan and espoused quite different philosophies when it came to domestic policy.  Johnson was the unrepentant New Dealer.  Nixon set out to dismantle many of his predecessor’s Great Society dreams and schemes, though he was by no means a textbook economic conservative.  There was enough difference between their words and deeds to demonstrate a clear contrast.

They never became “buddies”—for a variety of personal and professional reasons. But they were much more than mere acquaintances.  They were two men propelled into the limelight by patriotism, ambition, and the call of unique and compelling times.  More than one-dimensional political strange bedfellows, they managed to maintain a personal connection that transcended the political realities and vicissitudes of the times that tested them.

When the January opening day arrived for the beginning of the Senate’s work in 1956, there was a glimpse of that connection.  With more than ninety Senators on the floor, Lyndon Johnson—just back to work following a lengthy recuperation—rose to be recognized after the chaplain’s prayer.  Vice President Nixon, in his constitutional role as President of the Senate acknowledged the Texan, remarking: “The Chair knows that he expresses the heartfelt sentiments of all the members of this body when he says that we are most happy to see the senator from Texas back in his accustomed seat.”  There was applause and LBJ said, “You don’t know how glad I am to stand at this desk again.”  A bit later, as Johnson posed for pictures in the lobby, Richard Nixon put his arm around the majority leader.

Some of this was politics as usual, of course, but the two men destined to share common glory seemed to connect on a personal level.  And the fact is that, as Senate Majority Leader, Lyndon Johnson cultivated and enjoyed a warm and constructive relationship with the Eisenhower White House, during a fascinating era of actual bi-partisan cooperation.

Of course, the 1960 race for the White House put RN and LBJ at obvious odds, with Nixon capturing the GOP nomination and Johnson pursuing an ill-fated stutter-step campaign for the Democratic nod that led eventually to the Vice Presidential slot under John F. Kennedy.  Though they were direct political opponents that year, Johnson and Nixon shared a common rivalry—with Kennedy.

During the fall campaign in 1960, Richard Nixon’s pledge to visit all 50 states was put in jeopardy after he injured his knee on the door of his limo in Greensboro, North Carolina.  The wound became seriously infected and the Vice President was forced to spend several days at Walter Reed Hospital.  Among his visitors was Lyndon Johnson—a classy thing to do.

During the Kennedy-Johnson years (1961-1968), Richard Nixon was the voice of the loyal opposition, his gubernatorial loss in California in 1962 and the Goldwater campaign of 1964 notwithstanding.  This, of course, meant that the public relationship between the two men, who added the commonality of U.S. Vice Presidency to their relationship resume, was primarily adversarial.  There were, however, numerous behind the scenes evidence that they maintained a friendly personal interaction, in spite of occasional blow-ups such as their highly public feud during the waning days of the 1966 midterm election campaign. 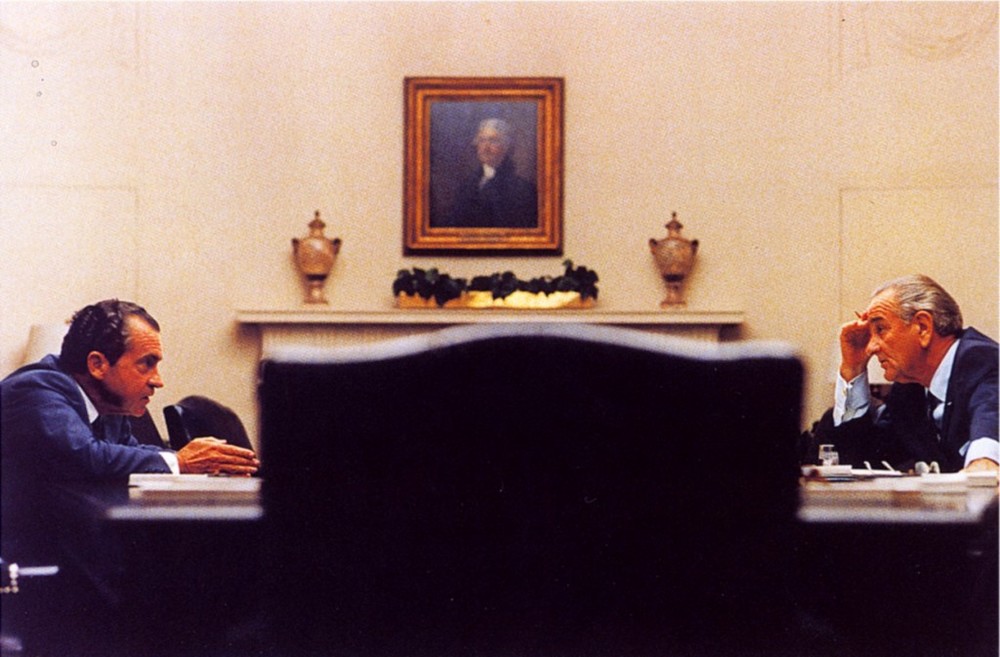 On July 26, 1968, President Johnson invited then candidate Nixon to the White House for an intelligence briefing on the Vietnam War. RN said LBJ “spoke feelingly of the men who were serving in South Vietnam and the letters he had to write to the next of kin of those who died.”

One key to their relationship was that both men counted Evangelist Billy Graham as a dear personal friend.  And as the 1968 race moved forward, with Nixon as the GOP nominee running against Johnson’s Vice President, Hubert Humphrey, RN asked the Reverend Graham to deliver a personal message from him to President Johnson.

The date was September 8, 1968, and Billy Graham told LBJ that Mr. Nixon had high respect for the man he described as “the hardest working president in 140 years.”  He pledged to never embarrass the President and, if elected, to task him with important work and make sure LBJ got proper credit when Vietnam was settled.  Johnson was very moved by this and asked the evangelist to repeat a few of the points, and remarking, “If Mr. Nixon becomes the president, I will do all in my power to cooperate with him.”

The spirit of this back-channel communication between the two men was tested in the final days of the campaign that year, in the fog of events surrounding potential negotiations in Vietnam, but whatever heat this generated between the two men quickly cooled off.

Of all Billy Graham’s interactions with Presidents, probably none rivaled that interesting moment when the Johnson Presidency gave way to the Nixon Presidency. Lyndon Johnson invited Billy Graham to spend his last weekend in the White House with him January 18-19, 1969.  One evening they all watched a movie, The Shoes of the Fisherman, starring Anthony Quinn.  When the president dozed off mid-film, Billy quietly went to the projectionist and asked him to keep the reels around, thinking Nixon would like it.

Johnson and Graham went to church together on Sunday, January 19th.  The next day, during the inauguration of the 37th president, the evangelist delivered the invocation.  Then, following Nixon’s address—and as the Johnson’s quietly left the stage—the now ex-president’s daughters kissed the preacher.  And Billy went back to the White House and spent the night with the Nixon’s on January 20th. The following Sunday, President Nixon began a custom of holding worship services in the White House.  The first clergyman to officiate was, of course, Billy Graham.

Johnson lived out his retirement days watching Richard Nixon’s presidency from afar.  In May of 1971, Nixon traveled to Texas to participate in the dedication of the LBJ Library in Austin.  In his remarks, Nixon meant to say that Lyndon Johnson had just finished “showing” him through the library, but the words came out “throwing” him through the library.  They had a good laugh. Everyone knew that Johnson’s famous treatment had likely involved a “throw” or two over the years.

Lyndon Johnson died on January 22, 1973.  The very next day President Nixon announced to the nation, “we have concluded an agreement to end the war in Vietnam.”  Toward the end of this historic address from the Oval Office, he said:

Just yesterday, a great American, who once occupied this office, died. In his life President Johnson endured the vilification of those who sought to portray him as a man of war. But there was nothing he cared about more deeply than achieving a lasting peace in the world.

I remember the last time I talked with him. It was just the day after New Year’s. He spoke then of his concern with bringing peace, with making it the right kind of peace, and I was grateful that he once again expressed his support for my efforts to gain such a peace. No one would have welcomed this peace more than he.

RN consoles former First Lady, Claudia “Lady Bird” Johnson at the funeral of LBJ. On January 22, 1973, RN announced – in a televised address – the peace reached in Vietnam and closed his remarks by honoring his predecessor, who died just the day before.

Top photo: RN with LBJ at the groundbreaking of the 36th President’s Library at the University of Texas, Austin on May 22, 1971. During the opening ceremonies, RN remarked that the LBJ Library with its 31 million documents contains more material than any Library ever established. RN’s Library would later surpass this record with its 40 million documents delivered from College Park, Maryland last year.

David R. Stokes is a pastor, author, columnist, and broadcaster. His book THE SHOOTING SALVATIONIST, a true crime, narrative nonfiction work set in the 1920s, will be released (Random House) on July 12th.