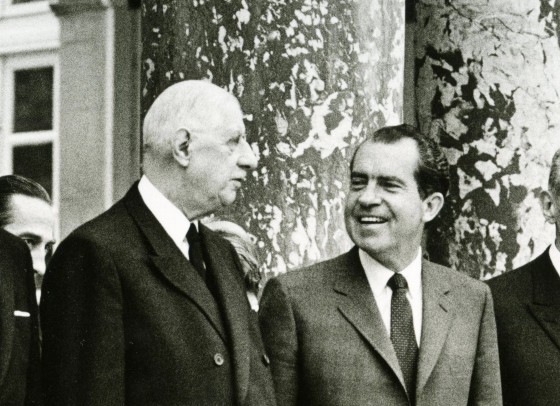 Like many who had yet to make the acquaintance of Charles André Joseph Marie de Gaulle, Richard Nixon initially developed a particular bias against the hauteur man of France. After all, to know de Gaulle was to know him through reporters and Foreign Service personnel, who only knew the man as abrasive and arrogant and who found his nationalistic interests a far cry from the necessities of modern times.

Richard Nixon first met the enigmatic leader as Vice President in 1960 during de Gaulle’s state visit to the United States. It was at this visit that the future President of the United States noted de Gaulle to be “a very kind man with a somewhat shy quality to describe.” Nixon thought de Gaulle almost gentle, but with the keen and mysterious ability to lead. Likewise, de Gaulle’s first impression of Nixon was positive–”one of those frank and steady personalities on whom one feels one could rely in the great affairs of state.” The roots of Nixon and de Gaulle’s mutual respect for one another began here.

Over the 1960s, and especially during Nixon’s wilderness years, de Gaulle found Nixon’s company to be equally as important to that of a head of state’s. After Nixon lost the presidential election of 1960 and subsequently the gubernatorial competition in 1962, de Gaulle courted him with the same cordiality as he would have given a President.

Perhaps prophetically, it was also during these years that de Gaulle predicted Nixon’s ascendancy to the White House. William Safire, an aide to Nixon during his wilderness years travels, recalled that de Gaulle had gazed at the various aides accompanying Nixon to get an understanding of who would be in his circle come the time he became president.

When Nixon made Europe his first foreign trip abroad in February 1969, the culmination of Nixon and de Gaulle’s relationship was communicated in their conversations at the Élysée Palace in Paris. Out of all the conversations President Nixon held with various heads of state, these were perhaps the most significant and revealing of both men’s foreign policy prestige.

The memorandum of conversation for the first Nixon-de Gaulle discussion, which can be viewed in its entirety below, demonstrated the senior statesmanship of the French leader. While Nixon was using his trip to Europe to gauge U.S. ally interest, he was particularly willing to receive counsel from the great man who belonged to history.

After Nixon and de Gaulle both agreed to discuss the whole range of East-West problems, the conversation commenced with de Gaulle’s intuition on Russian foreign policy.

“[De Gaulle] did not feel that the communists were advancing any longer,” the transcription reads. “He did not think that the danger of communism was over–it may last many years still but it can no longer conquer the world. It is too late for that. The dynamic is gone.”

Under this pretext and adding to his refreshing sense of foreign policy, de Gaulle delved into the necessity of considering rapprochement with China.

Because of this circumstance, and because the Russians no longer thought possible to conquer the West, de Gaulle opined that working towards a détente was “a matter of good sense” for both sides. If the two sides were not ready to make war, to make peace would be the most sensible route.

Nixon further engaged de Gaulle on Russia’s stance in the world by asking him whether or not the General believed that the Russians considered the American nuclear deterrent as credible. Transcribed is de Gaulle’s response:

The Russians knew that the U.S. could not accept or allow the Russians to conquer Europe for that would also mean the conquest of Africa and the isolation of the United States on the American continent. Though they might have initial success with tactical weapons they know that it would not stop there and that the U.S. would eventually have to use all of its power and destroy the USSR. The USSR of course also had the power to destroy the U.S. He did not believe that the Russians wanted everybody to be dead, themselves included. It was not natural for living beings to harbor such ideas. The death of everyone was not a policy.

More importantly, de Gaulle claimed that if both countries used tactical weapons, all of Europe would most certainly be destroyed. In the end, both President Nixon and de Gaulle agreed that détente would be the most sensible and the most required route.

Turning to the Middle East conflict, President Nixon expressed his pessimism about the inking of a peace settlement anytime soon. De Gaulle stressed the importance of establishing Arab-Israeli peace as soon as possible, for if the situation grew worse, “the Arab governments would fall and the madmen would replace the existing Arab governments.” Both the U.S. and USSR would not be interested in leading radical forces.

The Presidents would hold further discussions during Nixon’s inaugural foreign trip, but it would be the last time that they discussed foreign policy thoroughly, as de Gaulle astonishingly resigned his post on April 29, 1970. Both would see each other one final time at President Eisenhower’s funeral.

“As the President of the United States, I was among them. But I was also there as a friend.”