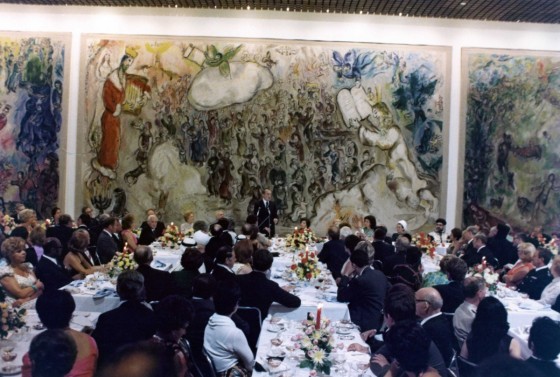 40 years ago today, President Nixon became the first American President to visit Israel. His trip was a part of a larger presidential itinerary to the Middle East, where he traveled to Egypt, Saudi Arabia, Syria, Israel, and Jordan. The trip would not only demonstrate the United States’ full commitment to establishing lasting peace in the Middle East, but would also demonstrate that strong American support for Israel’s sovereignty and security were compatible with U.S.-Arab friendship.

At a state dinner accorded to him by the Israeli government, President Nixon, with the permission of current Israeli President Ephraim Katzir, praised the leadership of the former Prime Minister Golda Meir, having worked with her on numerous occasions at Israel’s most critical moments. The President, in the most enthusiastic of words:

And I can say to this audience here gathered in the Knesset in Israel that no leader I have met, no president, no king, no prime minister, or any other leader has demonstrated in the meetings that I have had with that leader greater courage, greater intelligence, and greater stamina, greater determination, and greater dedication to her country than Prime Minister Meir.

President Nixon has done many things that nobody would have thought of doing. All I can say, Mr. President, as friends and as an Israeli citizen to a great American President, thank you. 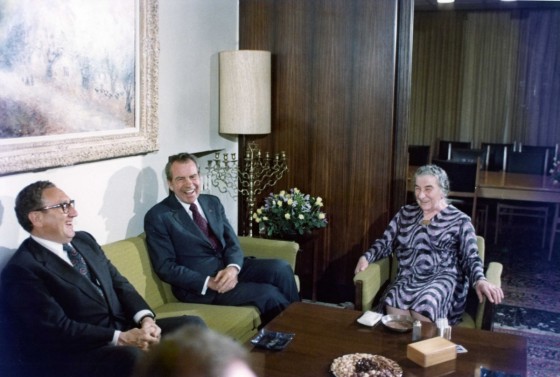 The President continued his toast, turning to the topic of peace and said that what the United States and Israel would jointly do in the future played a pivotal role in the sustenance of peace. President Nixon compared the opportunity for peace in the Middle East with that of his journey to China two years prior. There was great risk involved, the stakes high, when President Nixon made his journey to the Chinese mainland. And so there was as great a risk with what the President planned to do in the Middle East in 1974.

In taking that risk, President Nixon brought a new element into the dialogue of the Middle East, a compendium of new ideas to nations outside of Israel, an introduction to new and renewed relations. It was a different approach, and thus an approach that posed risk of failure–but if President Nixon were to instead dissolve the American presence in the Middle East, or at least demonstrate little commitment, conflict would have undeniably sprung forth.

And so, President Katzir accepted President Nixon’s commitment, toasting to him:

Peace, Mr. President, was and remains our cherished goal. We are not a martial people. Our legendary heroes are prophets and scholars. We are the authors of mankind’s oldest pacific tradition. Make peace and pursue it, declared the psalmist. I can, therefore, assure you, on behalf of the government and the people of Israel, that we are eager to pursue the path of dialog and negotiations which you are endeavoring to bring about between ourselves and our neighbors.