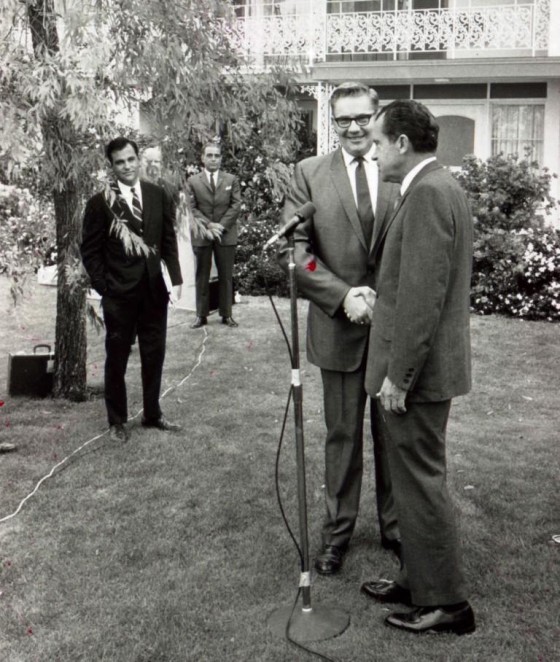 President Nixon announces Donald E. Johnson as his nominee for Administrator of Veterans Affairs on the lawn of the Newporter Inn – June 5, 1969.

On the morning of June 5, 1969, prior to his departure for Hawaii in preparation for the Midway Island talks with President Nguyen Van Thieu, President Nixon and his staff flew via helicopter to the Newporter Inn in Newport Beach, California. The purpose of this brief layover was to announce Donald E. Johnson as the President’s nominee to become administrator of Veterans Affairs.

Johnson, a World War II veteran who was a sergeant in the 89th Division of General George S. Patton’s Third Army in Europe, served as President Nixon’s Veterans Affairs Administrator from 1969 to 1974. Before he was appointed, Johnson was a seed and fertilizer dealer in West Branch, Iowa, and a national commander of the American Legion.

In looking for a prime candidate for the position of administrator of Veterans Affairs, President Nixon looked for a man “who, first, was a veteran, and therefore knew the problems of veterans; a man, second, who had the business experience which would qualify him to handle the immense administrative problems involved in the Veterans Administration; and third, a man who would administer this agency without regard to any partisan considerations.”

With his experience in veterans services organization, President Nixon believed Johnson to be the right man for this challenging job. Johnson would enter as administrator of the VA during a period where the number of war veterans was increasing as a result of the Nixon administration’s policy of Vietnamization and gradual withdrawal of troops from Vietnam. He was tasked with balancing the growing demands for VA services to a budget that was limited.

At the news conference in Newport Beach, President Nixon shared these favorable words for Mr. Johnson:

Don Johnson meets the test in all respects. He has a distinguished record in World War II. He is a former Commander of the American Legion. He has the business background which qualifies him for administration, and he has a deep devotion to country, which goes completely beyond any partisan consideration, although he does happen to be a Republican.

Following the President’s remarks introducing Mr. Johnson, the press office released a statement regarding the future of benefits for Vietnam veterans. In this statement, the President outlined ways in which the nation ought to reevaluate the investment in the future of the veteran. Though existing programs were worthwhile and effective, more needed to be done to bring investment full circle:

We are proud of the existing programs that now are available to our veterans. What we must do is to seek and find ways in which the efforts of the Veterans Administration and the Federal Government in general can be improved and made available to the largest possible number of Vietnam veterans.

I am, therefore, appointing today the President’s Committee on the Vietnam Veteran. This Committee will be chaired by the Administrator of the Veterans Administration and will consist of the Secretary of Defense, Secretary of Labor, Secretary of Health, Education, and Welfare, the Director of the Office of Economic Opportunity, and the Chairman of the Civil Service Commission.

With the establishment of the President’s Committee on the Vietnam Veteran, President Nixon hoped to have answers to these questions:

– How can we help more veterans to benefit from existing programs?

– How can we design programs to help those veterans who need help the most-the under-educated, ill-trained, hitherto unemployed or underemployed?

– How can we improve the overall program of veterans benefits so that it meets the specific challenges of our society and the needs of the veterans?

The answers would assist President Nixon, and more importantly, Donald Johnson, in administering the best veterans services programs in the history of the United States–a hope RN demonstrated in the final words of his statement:

It is our hope that there will come a day when the benefits of peace will convince men and nations of the folly of war; until then, we must make certain that the benefits we offer reflect our pride in our veterans and our gratitude for their sacrifices.