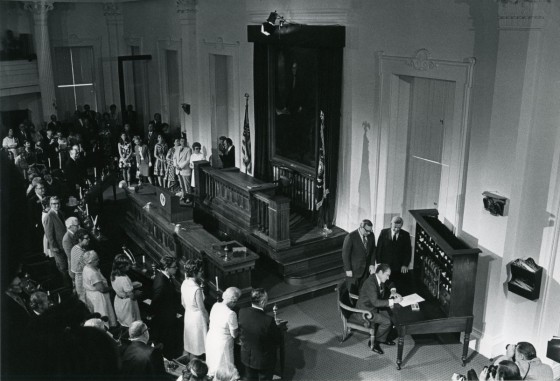 On this day 43 years ago, President Nixon signed a bill dedicating the Lincoln Home in Springfield, Illinois, as a National historic site. In 1887, the old Lincoln home, sitting on 8th and Jackson Streets, was donated to the State of Illinois by Robert Todd Lincoln, Abraham Lincoln’s son. The state held the responsibility of maintaining and keeping the residence open to the public. In 1960, the home was designated a National Historic Landmark and was automatically listed on the National Register of Historic Places in October of 1966. Finally, on August 18, 1971, the home was turned over to the National Parks Service by Congressional mandate and authorized by President Nixon.

It was a special occasion for the President–he had admired Abraham Lincoln his entire life. At a very early age, RN cultivated a budding interest in the 16th president, writing a short biographical piece on him as a 6th grader.

His biography is transcribed below:

On Feb. 12, 1809, Abraham Lincoln was born. When a young boy his father moved to Indiana. Lincoln did not have much education and what he did have he got from his mother. When he was nine years old his mother died. Lincoln was very sad. He afterwards said, “all that I have and all that I know I owe to my angel mother.”

His father again married, this time a wealthy widow. She gave him more education and he began to read. John Hanks, his stepmother said that when he got home from work, he would grab a piece of corn bread, get a book, sit down by the fire and begin to read.

When Lincoln was getting to be a young man a friend of his asked him to go down the river with him. Lincoln gladly consented and on the way he saw a slave auction. he said, “if I ever get a chance to hit that thing I’ll hit it hard.”

Soon after Lincoln went in partnership with another man, keeping a store. One day he walked six mile to pay a woman back three cents and earned the name of “Honest Abe.” One day he bought a barrel that contained some law books. He was interested in law and one day when he was defending a man, his opponent said that he saw the man commit the murder by the moon light. Lincoln said that the moon was not shining that night.

Lincoln was opposed to the Kansas, Nebraska bill and started to debate with Douglas, the founder. He rose so high in popularity in this debate that he was elected president of the United States.

Just about as soon as he was elected, the south left the Union and the Civil War started. Lincoln had four children but all die except one, Tad. Tad would write funny letters to his father. About the time that the Battle of Gettysburg was over, Lincoln made his great speech. He did not think that it was good but he learned that it was so fine that the people could not clap for it.

After the war the Lincolns went to the theater with the Grants. He was shot by Boothe and he soon died. The martyred patriot, president of our country.

As a representative and later guardian of the party birthed at the ascension of Abraham Lincoln, RN often referenced the words and philosophies of the great President. As a precursor to the 1966 campaign season, RN urged his Republican peers to be Lincoln Republicans in hopes of spurring a renewed image of a battered party.

RN found himself at the helm of a country divided and crises ridden–a state of which had not seen since the Civil War. It would come as no surprise then, that when RN gripped the helm of a fledgling ship and tried to steer his country to peace and prosperity, he looked to the posthumous council of President Lincoln. In a letter to Congressman Robert McClory of Illinois written on February 12, 1972–Lincoln’s 163rd birthday–RN aptly personified the spirit of Abraham Lincoln, a spirit that runs deep in the lore of American perseverance.

His forthright and honest words sank deep into the understanding of every listener, and what he said of Henry Clay, a man he deeply admired, could well be applied to Lincoln himself:

Lincoln meant more to RN than simply a man to be admired for his accomplishments. He represented the most ideal qualities of a United States President–strong, competitive, with an unwavering faith in the potential of a young and free nation. He was a man to be revered for his ability to see beyond the perils of war and weakness to the periods of peace ahead. RN alluded to Lincoln’s merits in his address to the distinguished guests of the bill signing:

What we must also remember is that Lincoln, while he was very kind and very compassionate, was a very strong man. He was a very competitive man. He argued almost 200 cases in the Supreme Court of the State of Illinois, and he always argued to win. He lost elections, and came back to win for the Presidency of the United States. He never gave up.

In his contests with the various generals, Lincoln, while he was always kind in handling them, could not accept or resign himself to temerity or timidity. After the great victory at Gettysburg, General Meade was dismissed, not because he had lost–because he had not-but because he did not follow up. Lincoln wanted to follow up and end the war. So we see this man, kind and compassionate and considerate on the one hand, but strong and competitive on the other.

Lincoln also had a very profound sense of destiny about the United States of America–what it was, what it meant to its own people, and what it meant to the world. We all remember what he said: that the United States of America was man’s last, best hope on earth. But listen to when he said it. America then was far from being the strongest nation in the world; it was far from being the richest nation in the world; and it was sorely stricken and divided by a civil war, the most brutal war, perhaps, of the 19th century in terms of the casualties that were suffered.

Yet Lincoln, this man who could see beyond war and beyond strife and beyond weakness to the periods ahead, stood tall and said America is man’s last, best hope on earth.