Presidents Nixon and Truman: Reconciliation at the Truman Library 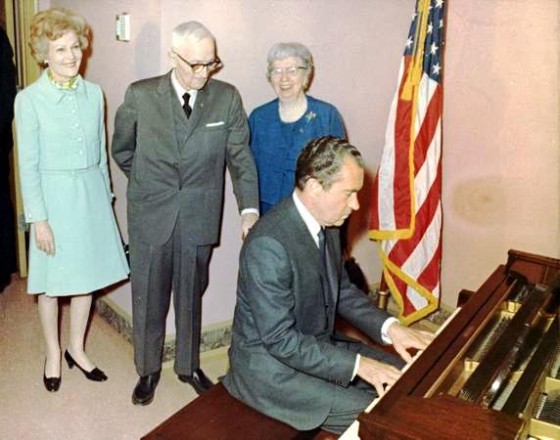 “Powerful ideological differences cannot always be bridged with personal camaraderie,” President Richard Nixon wrote in In the Arena: A Memoir of Victory, Defeat, and Renewal. “When people feel strongly about major issues, they do not easily put their arms around others who feel the other way.” No statement could better describe the twenty-five year contentious relationship between Presidents Harry Truman and Richard Nixon. When the newly elected thirty-seventh President visited the Harry Truman Presidential Library in Independence, Missouri on March 21, 1969, it proved that fierce political rivals could respect one another despite their differences, and provided a powerful, public symbol of political reconciliation.

The two Presidents’ political relationship did not start out so badly. In 1947, newly elected Congressman Nixon voted to support President Truman’s plan to provide military and economic assistance to the non-communist Kingdom of Greece in their civil war with the Soviet supported Provisional Democratic Government. The utilization of American military and economic aid to contain the spread of communism became the basis for the Truman Doctrine and led to the institution of the Marshall Plan and the signing of the National Security Act of 1947, the three pillars of U.S. Cold War strategy.

The relationship, however, took a turn for the worse when Congressman Richard Nixon pursued allegations that former State Department official Alger Hiss functioned as a Soviet spy during and after World War II. Popularly known as the “Hiss case,” President Truman responded by enacting executive orders and executive privilege to limit Congressman Nixon’s investigation and dismissed the case as nothing more than political theater and a “red herring.” By 1950, a jury convicted Hiss on perjury charges and it wouldn’t be until the 1990s that evidence from the NSA’s and CIA’s Venona material overwhelmingly confirmed Hiss’ guilt.

The 1952 Presidential campaign pitted the Eisenhower-Nixon campaign against the President and his record which further imbued acidity. In an interview, the late Stephen Ambrose elaborated on the bitterness of the campaign and the icy pre-inaugural meeting between newly elected President Dwight Eisenhower and President Truman:

And they began taking cracks at each other that got worse and worse — Truman especially, saying, ”You know Eisenhower doesn’t know any more about politics than a pig knows about Sunday.” And they were so furious with each other that when the transition took place, Eisenhower refused to go into the White House to have a cup of coffee with President Truman. And then Truman joined Eisenhower in the open limousine for the ride to the inaugural and they say that silence was the coldest you ever heard.

Yet after the 1969 inaugural, the newly elected President Nixon presented former President Truman with the piano he once played in the White House. Years later, Richard Nixon described the event and his relationship with and respect for President Truman in a letter to grand-nephew Harry S. Truman IV: 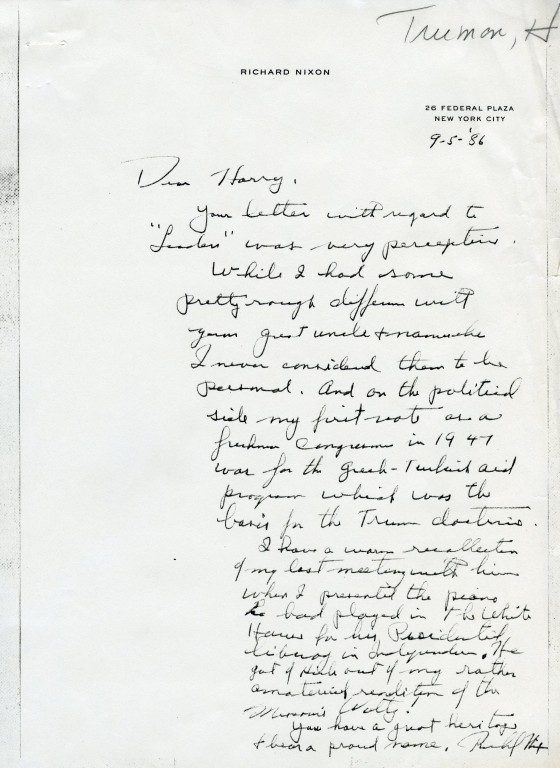 Your letter with regard to “Leaders” was very perceptive.

While I had some pretty rough differences with your great uncle and namesake I never considered them to be personal. And on the political side my first vote as a freshman Congressman in 1947 was for the Greek-Turkish aid program which was the basis for the Truman doctrine.

I have a warm recollection of my last meeting with him when I presented the piano he had played in the White House for his Presidential library in Independence. He got a kick out of my rather amateurish rendition of the Missouri Waltz.

You have a great heritage and bear a proud name.

HARRY S TRUMAN will be remembered as one of the most courageous Presidents in our history, who led the Nation and the world through a critical period with exceptional vision and determination.

Our hopes today for a generation of peace rest in large measure on the firm foundations that he laid.

Recognizing the new threat to peace that had emerged from the ashes of war, he stood boldly against it with his extension of aid to Greece and Turkey in 1947–and the “Truman Doctrine” thus established was crucial to the defense of liberty in Europe and the world. In launching the Marshall Plan, he began the most farsighted and most generous act of international rebuilding ever undertaken. With his characteristically decisive action in Korea, he made possible the defense of peace and freedom in Asia.

He was a fighter who was at his best when the going was toughest. Like all political leaders, he had his friends and his opponents. But friends and opponents alike were unanimous in respecting him for his enormous courage, and for the spirit that saw him through whatever the odds. Whether in a political campaign or making the great decisions in foreign policy, they recognized and admired him–in a description he himself might have appreciated the most–as a man of “guts.”

Embroiled in controversy during his Presidency, his stature in the eyes of history has risen steadily ever since. He did what had to be done, when it had to be done, and because he did the world today is a better and safer place–and generations to come will be in his debt.

It is with affection and respect that a grateful Nation now says farewell to “the man from Independence”–to its thirty-third President, Harry S Truman.