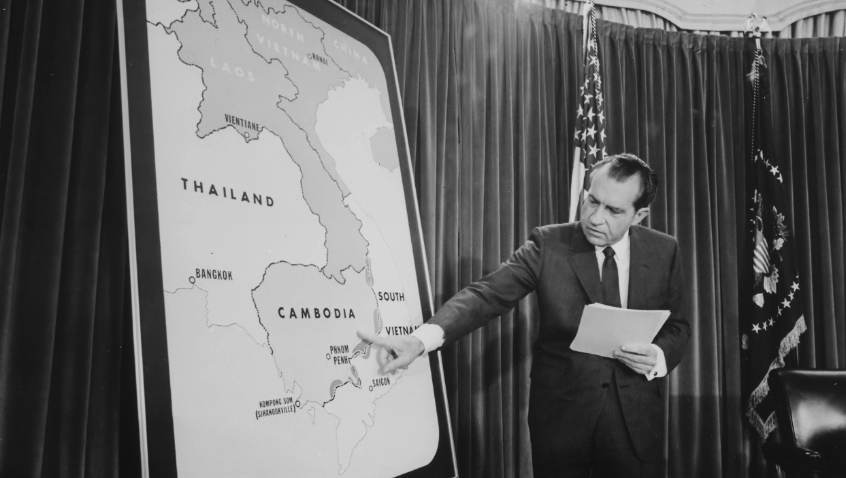 Fifty years ago today, in an address to the nation from the Oval Office, President Nixon announced that US and South Vietnamese forces were conducting a limited operation against the North Vietnamese and Vietcong sanctuaries inside Cambodia that were being used to attack allied forces across the border in South Vietnam.

Ten days earlier the President had announced the withdrawal of 150,000 Americans from the region. The North Vietnamese invasion of Cambodia on April 17th changed the situation, and attacks across the Cambodian border into South Vietnam had increased:

Tonight, American and South Vietnamese units will attack the headquarters for the entire Communist military operation in South Vietnam. This key control center has been occupied by the North Vietnamese and Vietcong for 5 years in blatant violation of Cambodia’s neutrality.

This is not an invasion of Cambodia. The areas in which these attacks will be launched are completely occupied and controlled by North Vietnamese forces. Our purpose is not to occupy the areas. Once enemy forces are driven out of these sanctuaries and once their military supplies are destroyed, we will withdraw.

These actions are in no way directed to the security interests of any nation. Any government that chooses to use these actions as a pretext for harming relations with the United States will be doing so on its own responsibility, and on its own initiative, and we will draw the appropriate conclusions.

Then the President described in detail his reasons for taking this action. The goal was to save American, South Vietnamese, and allied lives by cleaning out the enemy sanctuaries:

Now let me give you the reasons for my decision.

A majority of the American people, a majority of you listening to me, are for the withdrawal of our forces from Vietnam. The action I have taken tonight is indispensable for the continuing success of that withdrawal program.

A majority of the American people want to end this war rather than to have it drag on interminably. The action I have taken tonight will serve that purpose.

A majority of the American people want to keep the casualties of our brave men in Vietnam at an absolute minimum. The action I take tonight is essential if we are to accomplish that goal.

Let us look again at the record. We have stopped the bombing of North Vietnam. We have cut air operations by over 20 percent. We have announced withdrawal of over 250,000 of our men. We have offered to withdraw all of our men if they will withdraw theirs. We have offered to negotiate all issues with only one condition–and that is that the future of South Vietnam be determined not by North Vietnam, and not by the United States, but by the people of South Vietnam themselves.

The answer of the enemy has been intransigence at the conference table, belligerence in Hanoi, massive military aggression in Laos and Cambodia, and stepped-up attacks in South Vietnam, designed to increase American casualties.

This attitude has become intolerable. We will not react to this threat to American lives merely by plaintive diplomatic protests. If we did, the credibility of the United States would be destroyed in every area of the world where only the power of the United States deters aggression.

Tonight, I again warn the North Vietnamese that if they continue to escalate the fighting when the United States is withdrawing its forces, I shall meet my responsibility as Commander in Chief of our Armed Forces to take the action I consider necessary to defend the security of our American men.

The time came long ago to end this war through peaceful negotiations. We stand ready for those negotiations. We have made major efforts, many of which must remain secret. I say tonight: All the offers and approaches made previously remain on the conference table whenever Hanoi is ready to negotiate seriously.

But if the enemy response to our most conciliatory offers for peaceful negotiation continues to be to increase its attacks and humiliate and defeat us, we shall react accordingly.

The map shown above is on display in the permanent galleries of the Nixon Library.