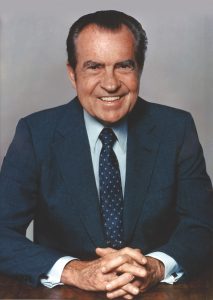 11:00 AM PT – Remembrance of Bruce Herschensohn

The 10AM birthday commemoration will feature a formal wreath-laying ceremony at the Memorials of President and First Lady Pat Nixon with remarks by Richard Nixon Foundation President and CEO Hugh Hewitt and Navy Region Southwest Commander Rear Admiral Bette Bolivar. Navy Band Southwest will perform a COVID-Conscious concert of American favorites as part of the program.

Tune in immediately after the Wreath Laying Ceremony for a special remembrance of the life and legacy of Bruce Herschensohn, a dear friend and longtime confidant of President Nixon and the Nixon family. This beautiful tribute will include stories both candid and inspirational of Bruce’s amazing life, as well as personal insights from five of his closest friends and colleagues. Program participants Ken Khachigian, Mark Larson, Pete Peterson, Arnold Steinberg, and program host Hugh Hewitt all had the opportunity to know Bruce as a conservative thought leader, candidate for U.S. Senate, filmmaker, professor, and friend.