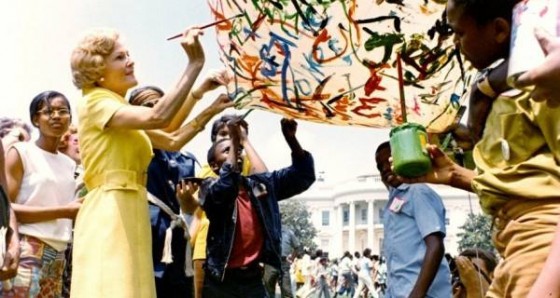 By Will Swift, author of PAT AND DICK: The Nixons, an Intimate Portrait of a Marriage.

In celebration of what would have been First Lady Pat Nixon’s 102nd birthday, let us remember some of her remarkable accomplishments as First Lady.

– She was the most traveled first lady in history until Hillary Rodham Clinton surpassed her record twenty five years later. She traveled to 41 states and for 131,723 miles to visit 31 countries. The New York Times called her “Madame Ambassador” for her diplomatic work during her travels with the president and her solo trips to Africa and South America.

– She was the first first lady to be the “personal representative of the president” at the inauguration of a foreign leader, President Tolbert of Liberia.

– She was the first first lady to confer with presidents of foreign countries. She discussed U.S. policy on Rhodesia and South Africa with the leaders of three African countries.

– She represented the president on an international humanitarian mission, spearheading efforts to raise funds and traveling high into the Peruvian Andes to bring relief supplies and comfort to the victims of the worst earthquake in the history of the Americas.

– She engaged in diplomacy by speaking to longtime Soviet ambassador Dobrynin’s wife Irina to make sure the May 1972 presidential visit to the Soviet Union was not cancelled over differences about Vietnam.

– During her 1969 visit to Vietnam, she was the first first lady to enter an active combat zone.

– On foreign visits she made sure that women were invited to political events, where they had previously been excluded, and visited settings where she could encourage women to take an active role in improving their lives.

– She helped women to recognize their right to equality and to improve their self-image in the U.S. and abroad.

– She encouraged more women to go into government and politics.

– She was the first first lady to publicly support the Equal Rights Amendment.

– For the first time in history, she and the president promoted women to work as military social aides in the White House, where they could serve at major state dinners and social events.

– She focused on volunteerism as her special project to address social problems at the local level and advocated passage of the Domestic Services Volunteer Act.

– She promoted her husband’s domestic agenda by making field trips to programs that highlighted his administrations’ environmental, law enforcement, and mental health policies.

– She was the first first lady to address the Republican nominating convention.

– She was the first first lady to make a solo campaign trip during the presidential campaign.

– She did more than any other first lady to refurbish the White House. Along with the executive mansion’s curator, she brought in six hundred historic paintings, antiques and furnishings, created the Map Room, renovated the China Room, and refurbished nine other rooms including the Green, Red, and Blue Rooms. Historian William Seale said the White House’s “great collection of Americana is the long shadow of Mrs. Nixon. The impulse, the idea and the energy were hers.”

– She arranged for the White House to be lit at night.

– She had wheelchair ramps installed at the White House for disabled citizens.

– She made the White House gardens and grounds available to the public.

– She initiated Candlelight Tours of the White House and other evening tours so that average American families could see the interior of the president’s home.

– She invited hundreds of average American families to non-denominational worship services in the East Room on Sundays.

– She arranged for recorded histories of the White House to be placed at intervals along the fence so people waiting to see the mansion could learn about it.