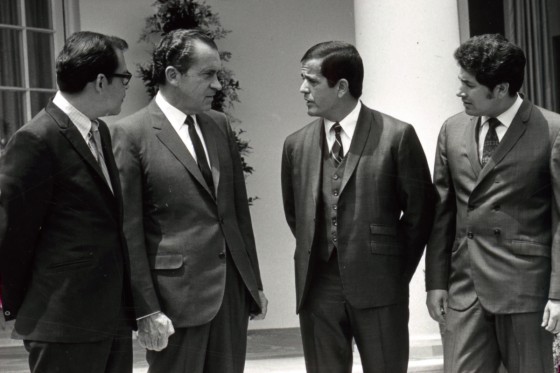 President Nixon with Martin Castillo, Chairman of the Interagency Community for Mexican American Affairs–as it was called in early 1969–Hank Queveda, its Executive Director, and Uraldo Palmares. 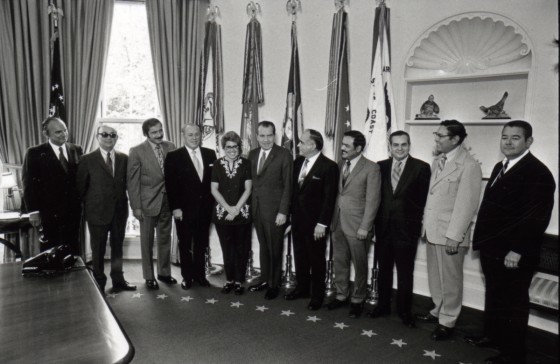 President Nixon with members of the Advisory Council of the Cabinet Committee on Opportunity for the Spanish Speaking People, established on December 31, 1969.

President Nixon believed that it was grossly irresponsible for government to promise billions of new Federal dollars for the poor and for minorities if it meant diminishing the collective pride of its recipients. More often than not, these promises fell short of their intentions. 116 programs for assisting small/minority enterprises operated among 21 agencies without appropriate coordination existed when President Nixon took office. Despite the programs’ bona fides, President Nixon believed that people must be moved, first and foremost, by hope–that the path to true dignity lay in building up personal and racial pride. The catalyst for realizing his administration’s successful domestic policy agenda for minority groups hinged on empowering not through capricious spending, but through responsible inspiration. President Nixon sought to accomplish this by bringing together private funds, private energies, and private talents to “develop the opportunities that lie untapped in our own underdeveloped urban heartland.”

On September 12, 1969, President Nixon signed a proclamation dedicating the week beginning on September 14 as National Hispanic Heritage Week. Not too long afterwards, in December of the same year, the President saw to the establishment of a Cabinet Committee on Opportunities of Spanish Speaking People. This statutory Cabinet Committee would help the administration ensure that existing and future Government programs would in fact reach all Spanish-speaking people.

By the President of the United States Of America

One of America’s great strengths is her diversity. A wide variety of peoples have made contributions to our nation; each has added its own strength and charm to American life, and each provides an ongoing link between our culture and those of other countries around the world.

The Hispanic culture is one to which this nation is particularly indebted. Men of Hispanic origin were among the first Europeans to explore this hemisphere. For four centuries men and women of Hispanic descent have provided distinguished leadership in our country and in other New World countries, both in government and in other walks of life.

Today the people of the United States are reminded of this rich heritage in many ways. Millions of our citizens speak Spanish, and Hispanic names and traditions grace many parts of our landscape, including both the town where I was born and the place where I am making my new home.

This country’s Hispanic heritage is particularly important because it reminds us of the great traditions we share with our neighbors in Latin America. In fact, when the Congress, just a year ago, requested the President to issue annually a proclamation setting aside one week as Hispanic Heritage Week, it designated the week which includes the dates of September 15th and 16th, when five Central American nations and the Republic of Mexico celebrate their Independence Days.

The Hispanic culture is one of depth, excitement, and beauty. It has crossed borders and mountains and oceans, and has made its influence felt in all parts of the globe. In honoring it, we give strength to that international understanding which is indispensable to world order.

Now, Therefore, I, Richard Nixon, President of the United States of America, do hereby proclaim the week beginning September 14, 1969, as National Hispanic Heritage Week. I call upon all of the people of the United States, and especially the educational community, to observe that week with appropriate ceremonies and activities.

In Witness Whereof, I have hereunto set my hand this twelfth day of Sept., in the year of our Lord nineteen hundred sixty-nine, and of the Independence of the United States of America the one hundred ninety-fourth.