The Path to Ending the Draft 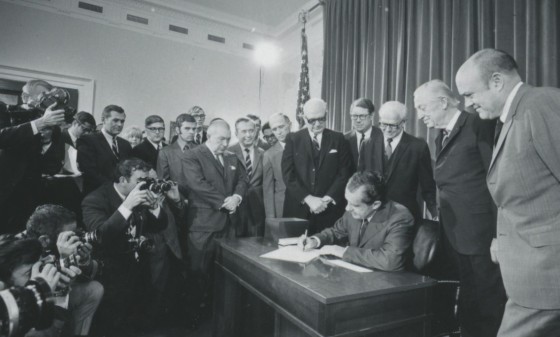 President Nixon signs the amendment to the Military Selective Service Act of 1967 on November 26, 1969.

On November 26, 1969, President Nixon signed an amendment to the Military Selective Service Act of 1967 that began the random selection or “draft lottery” for military conscription. Similar to past legislation regarding military drafts, the amendment was received with strong criticism from a public increasingly fatigued by the Vietnam War. However, Congress and the Nixon Administration together agreed that this temporary change in policy would allow for the government to end the draft at the earliest possible date in the future, which was a major agenda item for President Nixon.

I would say that looking to the future, while this measure will remove a great number of the inequities and particularly remove the uncertainty to which I refer, we shall not be satisfied until we finally can have the system which I advocated during the campaign of a completely volunteer armed force. We cannot move to that now because of the requirements for armed services. That is, however, our ultimate goal.

One of the most instrumental officials in Nixon’s White House tasked with draft overhaul was Peter Flanigan. Along with a wide range of other duties, such as the Assistant to the President for International Economic Affairs and Executive Director of the Council on International Economic Policy, Flanigan helped execute an overhaul of the embattled Selective Service System. Flanigan seemed to have a personal obligation to improve the outdated draft system and worked tirelessly through his 5 years in the administration to end the military draft.

President Nixon and Flanigan realized their goal of ending the draft in 1973. It is difficult to imagine they would have been able to accomplish this feat had the Administration (and Congress) not taken the politically difficult stance in 1969 to initiate draft change, which paved the way for ending the draft altogether within 4 years.

Upon Flanigan’s exit from the White House in July 1974, President Nixon had the highest remarks for one of his most trusted aides:

While I have long known of your intention to return to private life, nevertheless, I am always reluctant to see so valued a friend and associate depart. You know of my profound admiration for your splendid achievements over the past five years, and I shall not dwell on them at length. Let me say, however, that of the many men and women who have served our Administration, few can match – and none exceed – the exceptional skills, energy and dedication you brought to your duties.

Pat joins with me in extending to Brigid and you our heartfelt good wishes for every success and happiness in the years ahead.