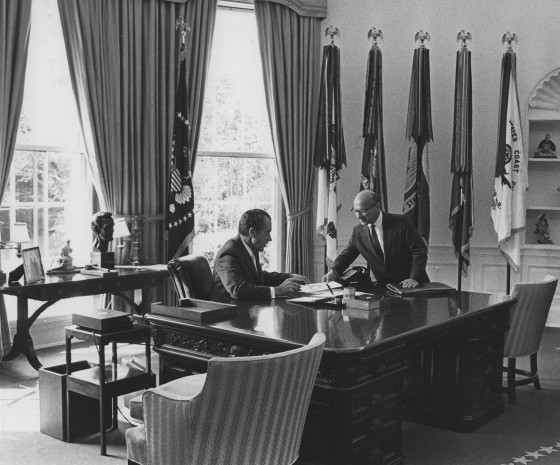 President Nixon meeting with future Nobel Laureate Dr. Milton Friedman, distinguished Professor of Economics at the University of Chicago, and the leading voice of the President’s Commission on an All-Volunteer Armed Force.

On February 21st, 1970, the Gates Commission presented to President Richard Nixon “The Report of The President’s Commission on An All-Volunteer Armed Force”, detailing the formal plan to end the draft and implement an all-volunteer force as well as addressing the moral obligation of the U.S to pursue such a force. The Gates Commission was formed at the request of the President shortly after his election with the goal of accomplishing the promise President Nixon made to the American people during his campaign. Former Secretary of Defense Thomas Gates would head the commission comprised of expert in military, public policy, and economic studies. View the entire Gates Commission report:

One of the leading voices of the committee and the original inspiration for an all-volunteer force was an economist by the name of Milton Friedman. Throughout the 1960s, Friedman wrote in favor of an all-volunteer force on the premise of individual freedom and liberty as well as basic economic reasoning. One of the many articles Friedman had written on the draft was in May of 1967, of which was published with the New Guard, a literary magazine of the conservative activist organization Young Americans for Freedom, titled “The Case For A Voluntary Army”. Read the article below:

The Gates Commission, formed two years later, would borrow much of the same arguments Friedman made in his article. The central ideas that shaped Friedman’s argument which became the key points of the Gates Commission were as such: (1) that young men who were forced into military service lacked the passion that an individual who was a volunteer would possess and in forcing any individual to serve would be to defy the principles of freedom; and (2) the condition of the U.S. military, which was at the time very poor and underfunded, could never improve unless it was forced to compete in the market and attract prospective volunteers. The freedom to choose would foster competition in the new market, hence building more efficient combat personnel within the armed forces. Additionally, the all volunteer military would be more in line with the principles of a free nation, and more cost efficient in the long run overall.

The work of the President’s Commission had served its purpose thoroughly and set the stage for RN to sway lawmakers on the hill towards the cause of a just society. With the strong intellectual foundation made possible by the Gates Commission, made possible by the contribution of Milton Friedman, it would only be a matter of time before congress voted in favor of ending the draft.

President Nixon’s position on the draft risked crossing the line of partisan politics, as it was an issue that was of concern to individuals from the far left to the far right. However, President Nixon often felt ending the draft was less of a political issue and more of a moral issue, and along those lines was able to successfully procure a beneficial transformation of America’s military. Ultimately, President Nixon’s goal in his administration was to achieve a just peace and freedom, and in pursuing a course of action towards ending the draft he would uphold the virtues of a free society and consequently instill a peace amongst concerned young Americans.