The Origins of the National Environmental Policy Act of 1969 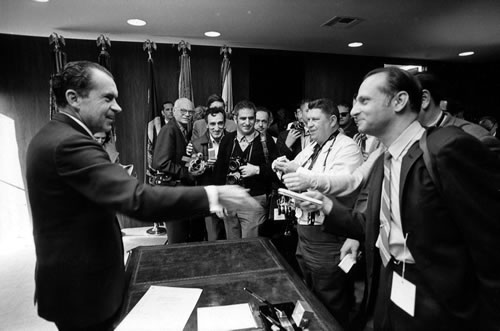 The National Environmental Policy Act of 1969 is one of the most important pieces of environmental policy passed in the 20th century. Often referred to as the Magna Carta of Environmental Policy, it laid out a uniform national approach to environmental issues. Its requirement that new projects have an Environmental Impact Statement was particularly effective, providing the bill an impact far greater than originally expected. This revolutionary legislation was the creation of two ambitious rivals, Senator Henry Jackson and Senator Ed Muskie, and an administration that was willing to make compromises to pass legislation which all parties involved desired in order to right environmental wrongs.

Senator Henry Jackson of Washington had been campaigning for a unified national environmental policy since 1967. He was the chairman of the Senate interior committee, and had worked to make oil money available to conservation funds and expand the Everglades National park. His Conservationist efforts won him popular support, and would later earn him a John Muir award. His experience in the the Everglades convinced him that the government needed a unified policy, since at the time each of the three projects underway in the parks had its own particular goals. The department of the interior was seeking to expand the park which it saw as the jewel of eastern park system. The army corps of engineers wanted to create dams and canals, meeting the infrastructure needs of Florida’s booming population. The department of transportation was breaking ground on a supersonic jet airport just miles upstream, where it sought to reap economic benefits and create a technological marvel. When Jackson met with the leaders of each project, it was clear that there was no policy in place to address conflicts. In May of 1969, Senator Jackson proposed legislation to create a small advisory group that could coordinate the government’s environmental efforts.

The Santa Barbara oil spill of 1969 had compelled Senator Ed Muskie to create legislation of his own. Muskie, nicknamed ‘Ecology Ed’ by the Sierra Club’s newsletter, believed in full company liability after oil spills, and he was politically motivated to introduce legislation enforcing it. Jackson was his biggest rival not only for the environmental spotlight, but also as a Democratic presidential nominee. The two sparred frequently over environmental issues. A key difference between their proposed environmental bills was jurisdictional. Jackson’s bill rested authority largely in the Senate interior committee, reflecting his belief that environmental standards should be internally enforced. Muskie’s bill was focused on water regulation, but put a greater emphasis on the role of the Senate Public Works committee, and also strengthened the EIS requirements. Moreover, the advisory body Jackson proposed was a board of three men, versus Muskie’s board of five.

The Nixon administration wanted to lead the way on environmental legislation, but wasn’t in full agreement with either the Jackson or the Muskie legislation. This naturally constituted a challenge, with the President’s Advisory Council on Executive Organization still in the process of preparing long term recommendations on environmental oversight. Then on May 29th President Nixon released an executive order which created his own environmental advisory panel, the Environmental Quality Council (EQC). Now the White House was faced with the possible complication of three different councils assigned to do essentially the same job — Jackson’s Council on Environmental Quality (CEQ) and Muskie’s Office of Environment Quality (OOEQ), in addition to the EQC. Indeed, this possibility was made almost into a certainty since Jackson’s bill and Muskie’s had enough support to pass even despite a Presidential veto, which would undermine Nixon’s reputation for environmental advocacy anyway. This internal memo, between then Cabinet Secretary John Whitaker and science adviser Lee DuBridge, highlights the conflict the administration was facing.

On their paths through Congress, the two Senators’ bills would evolve considerably. In Jackson’s bill, the EIS requirements were strengthened and broadened in scope. Muskie also convinced the author to add a mechanism for forcing action. He then restructured his OOEQ to complement Jackson’s CEQ. As John Whitaker described it “the CEQ created in the Jackson bill would be concerned with policy considerations, while the proposed OOEQ in the Muskie bill would function as a staff for the new council.” When the bills passed before Nixon’s desk, both were signed. In the end however, in order to avoid the complication of duplicate committees, the President never activated Muskie’s OOEQ.

The details concerning committees enumerated in title II of the bill were controversial. However, the EIS requirement stipulated in title I proved to be more so, as well as more important. The EIS language became a central tool for environmentalists in challenging federal projects. The Alaskan pipeline, the work in the everglades–and hundreds of other projects–faced delays, court battles, and outright cancellations because of flawed or incomplete EISs. This frustrated the administration because it drove up costs. In addition, it earned the ire of many in Washington–including the bill’s creator. However, despite the annoyances it produced, it was crucial for pursuing the goal President Nixon envisioned when signing the bill, as he asserted that “the 1970s absolutely must be the years when America pays its debt to the past by reclaiming the purity of its air, its waters, and our living environment.”